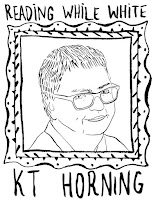 In the past twenty-four hours we've seen thoughtful critical reviews from Jennifer Baker and Edi Campbell about a new book coming out next week by e. E. Charlton-Trujillo, When We Was Fierce (Candlewick). Both reviews offer African-American perspectives on the book that contrast sharply with the praise it has received so far from White reviewers and librarians on social media. Why is it that Whiteness continues to dominate professional reviews? And what can be done to change that?

Last week I spoke to School Library Journal reviewers who were nearing the end of an eight-week course on Diversity and Cultural Literacy in Professional Reviews. The group had already heard from experts such as Debbie Reese, Angie Manfredi, Malinda Lo, Allie Jane Bruce, and Edi Campbell, and they had already done extensive reading and participated in online discussions with each other.

I think it’s great that Kiera Parrott and Shelley Diaz of SLJ are providing these kinds of opportunities for their team of volunteer reviewers. We need to see more positive steps forward in our profession for our reviewers and for people in our field at large. Because let’s face it, the majority of children’s book reviewers are White, as are most members of book evaluation and a award committees. Our experiences as White people are limited. How can we discern if a book about a child of color is authentic? In order to do our job, we have to seek out and listen to diverse voices. And those voices are not appearing much in the professional review journals.

A case in point: When We Was Fierce by e. E. Charlton-Trujillo. The book deals with a group of African-American teenage boys in the inner-city who get caught up in gang activity. I first became aware of this book when I started seeing the advance praise and reviews for it in the professional journals. Publishers Weekly, Kirkus, and Booklist all gave it glowing starred reviews. Normally, this would make me eager to get the book, but something stopped me short -- the lines that the reviews quoted from the book. A sample:

“Jive brothers rolled in hard./ They walked intent.... I didn’t want nuthin’ to do with their truth./ Sometimes it don’t matter what you want or intend./ It’s gonna go how it go” [quoted in Publishers Weekly]

“He wanna have speak”; “We all held our wait.” [quoted in Kirkus]

It’s sort of Black English. But not really. One of the reviews made reference to a “semi-invented vernacular” and right away that waved a red flag for me. Coming from a background in Linguistics, I know that African-American Vernacular English is not “broken English.” It has complex and consistent grammatical and phonological rules, and you can’t just “make it up.” It’s a living, breathing language.

If Charlton-Trujillo were creating a form of English for people living in the future, as Anthony Burgess did in A Clockwork Orange and Russell Hoban did in Riddley Walker, I might buy it. But she’s not. She’s putting words in the mouths of characters who supposedly live in the Here and Now. In fact, it’s the raw immediacy of the story that these reviewers seem to be especially high on.

In her seminal study, Shadow and Substance: Afro-American Experience in Contemporary Children’s Fiction, Dr. Rudine Sims Bishop cited language as one of the five key traits that define books reflecting authentic Black experience, what she called “culturally conscious fiction.” These are five traits that cultural outsiders can get right, but rarely do. They don’t walk the walk, talk the talk (in this case, literally), and they haven’t, as Virginia Hamilton once said, “lived the life.”

But here’s the thing. If I hadn’t had a background in Linguistics that made me sensitive to language usage (and misusage), I might have taken these reviews at face value and simply trusted the judgment of these three reviewers.  I might have completely jumped over this line in the Kirkus review: “Only the free verse’s frequent apostrophes connoting a dropped letter are stereotypical and distancing.” Frequent apostrophes… stereotypical… You know what that conjures up? A Joel Chandler Harris-type fake “Negro dialect.” And keep in mind that this line appears in a starred review. So are we saying that stereotypical speech from an African-American character is not only okay but highly recommended? Can’t we do better than that?

Booklist goes one step further and drives its starred review home with a feature interview with Charlton-Trujillo entitled “Teeth, Truth and Tenacity.”  In it the author talks about the language she used:  “Right from the jump, I could hear the music of T’s world that hadn’t existed in YA before.” Hadn’t existed in YA before?  That’ll be news to Jacqueline Woodson, Coe Booth, Kwame Alexander, Jason Reynolds, Kekla Magoon, and many more. And any of them might point back to the work of Walter Dean Myers, Virginia Hamilton, and Alice

Childress, whose book A Hero Ain’t Nothin But a Sandwich was published so long ago that I read it as a teen while listening to the Jackson 5. Charlton-Trujillo goes on to explain her invented vernacular:  “Slang can become dated quick, so I had a unique opportunity to incorporate some slang along with a new vernacular.” Suffice it to say that some opportunities are best not taken.

Even though two of the three starred reviews were anonymous, they read to me as evaluations by cultural outsiders. The book is a week or so away from publication and we’re just now beginning to get responses from prominent African-American critics. They see the book completely differently. They are not finding it “[g]raceful, trenchant, moving, and utterly necessary” as the Booklist reviewer did.  They have found it inauthentic, even offensive.

Jennifer Baker and Edi Campbell are offering important insider perspectives that are sadly lacking in the professional journals. White people can and should learn from them. Please read their reviews and think hard about them before you place When We Was Fierce into the hands of a young reader.
****

Update (July 26, 2016): Zetta Elliott has added her voice on her blog with this essay: Black Voices Matter
K T Horning at 1:05 PM
Share