Thanks to Debbie Reese

In her post the other day, Megan mentioned a recent exchange on Debbie Reese's blog American Indians in Children's Literature.  In my home and at work AICL is a frequent topic of conversation. I try to check in on it on a regular basis to see what's new. Sometimes I go there to see if Debbie has reviewed a particular book I have questions about. And other times I first hear of an ongoing lively discussion on AICL via Facebook or Twitter.

It was thanks to Debbie that we were initially inspired to create this blog. At the ALSC Day of Diversity last January, during a question-and-answer session, she called on all of us to raise our voices and join in the ongoing discussion of diversity (or lack thereof) in children's books, saying,  "I can't do this alone." So, thank you, Debbie, for putting out the call to action. I'm sorry it took so long for some of us to respond.

I want to tell you something else about that day that has always stuck with me. You probably won't ever find it in any recap of the day, so you would only know this happened if you were there.

After one of the sessions, people lined up at a microphone to speak. Some had comments, some had questions for the panelists who had just spoken before. Debbie had been about third or fourth in line, patiently waiting her turn, and just when she got up to the microphone, a White woman hopped up from her seat and jumped in front of Debbie to take the mike. I don't remember what she said, all I can remember is feeling shocked that someone would be so rude.

It probably shouldn't have surprised me. White people have been "taking the mike" from people of color for generations.

But isn't that what we're doing here on this blog? I hope not.  We envision Reading While White as an opportunity for White people to add their voices to the discussion of race in children's books in addition to and not instead of those voices like Debbie's, and Zetta's, and Sujei's, and others you will find on our list of Kindred Spirits. We hope you will read their words and think about them.

White people have a hard time discussing race. I know because I am a White person and it's hard for me, even though I have been discussing race for many years. I see other White people struggle in these discussions. We worry about saying the wrong thing. We get defensive on behalf of the entire White race. ("But that's not me!")  We often get upset when confronted with something that challenges what we think we know about history or social relations. Zetta Elliott recently sent me this definition of cognitive dissonance that describes this feeling perfectly: 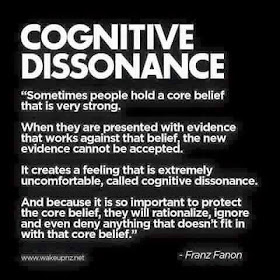 I often experience cognitive dissonance when I read Debbie's blog. I can find myself getting angry, especially when she is critical of a book I love or an author I admire. It hurts. But I try not to take it personally so I can open my mind and learn from Debbie's perspectives. I try to hold my defensive feelings in check.  It's not always easy but it is ultimately worth the effort.

When it comes to discussing race and racism, I think we White people need to develop a thicker skin. That's how we'll learn and evolve, thanks to people like Debbie Reese.