An open letter to Patrick Jones and VOYA Magazine

Back in November, you contacted me to offer feedback on an article you would be submitting to VOYA. That article, in which you “think out loud” on the subject of writing characters of color as a White man, was included in the excellent June issue of the magazine (featuring pieces from a veritable who’s who of bloggers, authors and activists, including Debbie Reese, Edi Campbell, and Sarah Park Dahlen). Months later, after looking at your contribution with fresh eyes and with the help of guidance and education from my friends and allies, I can see that I utterly failed you. In retrospect, here are things I wish I’d thought to say to you then:

As I look at the above list above I see that these are things that I need to do, too. Because while I didn’t make you write this piece, Patrick, I saw it, read it, and told you it was good to go. I am trying to stay quiet and listen to others and learn as much as I can from this experience so that I don’t make these same mistakes again. I feel absolutely sick knowing that something I did led to the publicity your article has created overshadowing the other contributors to this issue of VOYA. How can I now go forward to be a better “Ally for Diversity in Children’s Books,” as the RWW banner reads? By shutting my mouth and re-reading the Twitter commentary generated by this and especially those pieces in VOYA that are so worth celebrating. I didn’t come up with this list on my own, Patrick--this is really a list of things that I learned from reading and really listening to people of color, First/Native Nations people, and my co-bloggers at RWW.  I am grateful to them for educating me, and I thank them for their patience and generosity. I hope that you will join me in doing more and more real listening, Patrick.  Start by reading this excellent piece in Fusion, which cites Justina Ireland, Ellen Oh, and Hannah Gomez, among others.

Speaking of the Fusion piece, I was pretty shocked at the reaction from VOYA Editor-in-Chief RoseMary Honnold. According to the article, Honnold wrote that those critical of your piece “need to read [your] article in the context of the entire issue.” I fail to see how this would suddenly make everything better, how it would make the inherent racism of your contribution more palatable. She spoke of your “many admirers and colleagues” and how you are “a highly respected member of the YA library community and the YA lit community,” apparently implying that this places you above criticism.

I have a really hard time with this type of response to criticism; it shows a remarkable lack of empathy from someone in a place of power. I hope that Honnold has since read the many, many responses on social media, such as: 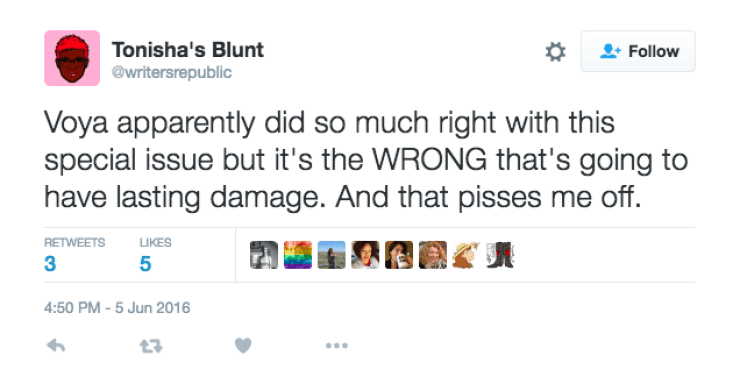 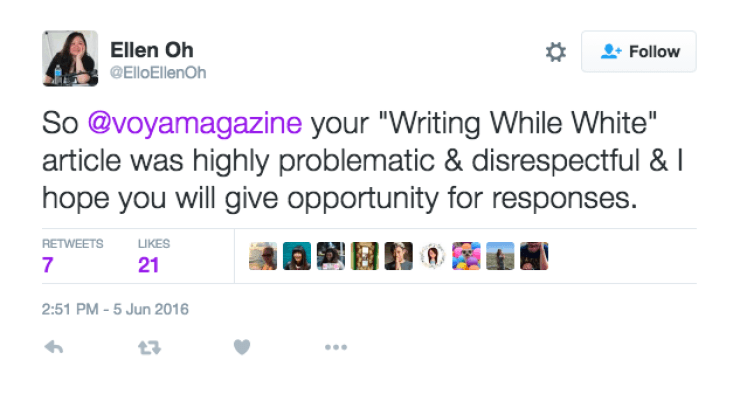 So, Patrick and the VOYA editorial staff: are you listening? From one who played a part in this, I highly encourage you to open yourself up to the criticism that is rightfully coming your way, and own up to your mistakes. 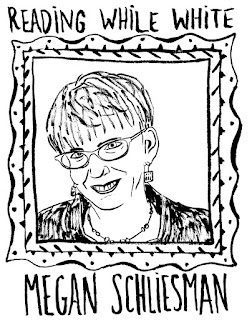 I appreciated Thunder Boy Jr. by Sherman Alexie from my first read of it earlier this year. It made me laugh out loud even as I felt buoyed by the meaning this story would undoubtedly have for many children, but especially Native children.
I also appreciated the review of Thunder Boy Jr. by Debbie Reese on the American Indians in Children’s Literature (AICL) blog.  It made me stop and think, and it helped me further my understanding of the broader contexts in which Thunder Boy Jr. exists and is shared.
I like the book. I like the review. These two things are not mutually exclusive.
Reading Thunder Boy Jr. is such a delight. It’s a well-crafted narrative with a distinct, childlike, emotionally honest voice, and full of good-hearted humor, all set against illustrations by Yuyi Morales that are playful, warm, and full of surprises.
In her AICL review, Debbie Reese writes:
Alexie's much-loved humor is front and center of this story. Because Thunder Boy's dad is a big man, his nickname is Big Thunder. The words "Big Thunder" are extra large and bold on the page, inviting readers to boom it out as they read it. That makes it all the more inviting as a read aloud. If his dad is Big Thunder, that means Thunder Boy's nickname is Little Thunder, and that is not ok with him:

“That nickname makes me sound like a burp or a fart.”
… I look at the illustration of the two kids [Thunder Boy and his little sister] and my heart goes right to my sister's grandchildren and memories of them playing and dancing together at my niece's wedding last week. I think they'll like this book very much. 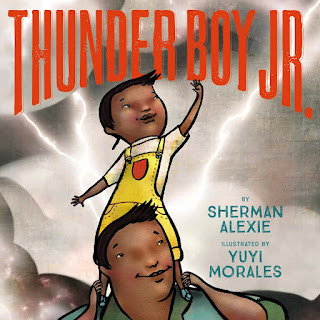 The review expresses appreciation for the book, but also asks questions about whether the fact that the author is Native (Alexie is Spokane) makes the fact that he has written what she also sees as a “Pan Indian” story alright. She states she doesn’t have an answer to that question.
I confess this was my introduction to the term “Pan Indian.”  I realized it refers to a lack of cultural specificity that implies there is universal Indian identity rather than many distinct Native cultures. Now I have the term to name what I’ve so often seen and described to teachers and librarians when talking about evaluating books about Native peoples critically.
I had not considered Thunder Boy Jr. in this context, because I knew Alexie is Spokane.  But nowhere in the picture book text itself or in an author’s note, the review points out, are Thunder Boy and his family (or Alexie himself) identified as being Spokane.
In a follow-up post to her review, Debbie Reese writes about why she thinks Thunder Boy Jr. needs a note to readers—one that identifies the story’s cultural specificity and even provides specific information on Spokane naming traditions. She leads with an anecdote about someone on Twitter who wrote about having kids pick new names after reading the book, and then shares a worksheet her cousin’s child brought home from school last year—a worksheet in which the children were given information reinforcing broad stereotypes about Native peoples and their names before being invited to choose their own names.

The underlying implication and takeaway of the worksheet, and, she’s concerned, of Thunder Boy Jr., for non-Natives is that all Native peoples and their naming traditions are the same. She notes that naming traditions are culturally specific, and for some cultures like her Pueblo one, names are conferred in private ceremonies. Activities like the worksheet her cousin’s son brought home not only strip Native cultures of their individual identities, but they reinforce stereotype after stereotype, along with decades if not centuries of cultural appropriation.
As I've noted, 100,000 copies of the book were published. I'm hoping that Little, Brown (the publisher) will include a Note in the next batch, providing a "do not use this book as an activity for which kids pick a Native American name," an explanation for why that is not a respectful activity, and a bit of information about Native naming. If you've got a copy, or if you get one of the 100,000 copies, I hope the information I share here is helpful

…
Inevitable: Tweet from someone who read Alexie's Thunder Boy Jr. to kids and then did activity where kids picked their Indian names.

Fact: Imagine being a Native kid in that class, who already has a name, given to them in ceremony, being asked to make up a new one.

Question: Would it help adult readers NOT do that activity if there was a note inside the book about Native peoples and naming?

A truth: A white teacher asking a Native kid to choose a new name harkens back to boarding schools where teachers asked Native kids to point to a blackboard to choose a new name.
I found myself thinking a lot about Thunder Boy Jr. and the broader context—the wider world—into which not books but children live and breathe and, we hope, thrive after reading Debbie Reese’s review and follow-up post. What she wrote didn’t change my appreciation for Alexie’s wonderful story, which it’s clear she also values. But it did expand my understanding and, I hope, critical thinking. Her willingness to ask questions that don’t have clear answers, and to share her perspective as it unfolds, and to teach as well as critique, is not only risky, but as remarkable in its own way as the lovely, lively, meaningful picture book about which she was writing.

Posted by Megan Schliesman at 6:00 AM 7 comments: