RWW at Two: Looking Back & Moving Forward This September

This September will mark the second anniversary of the Reading While White blog, and there is much work to be done. We are committed to our mission.

To mark our second anniversary, we are planning a series of posts for September to shine the spotlight on amazing books written by creators of color and First/Native Nations authors and illustrators. We will also challenge ourselves to look back and to re-examine beloved texts from our pasts through nostalgia posts. With the help of colleagues who have volunteered to share guest posts, we will also have the opportunity to bring in new voices and ideas as we move forward.

We are reminded of the August 2017 ALSC Community Forum in which Dr. Nicole Cooke recommended Race Talk and the Conspiracy of Silence by Derald Wing Sue and said, “silence speaks volumes.” As we enter into our third year, we will continue to listen to feedback and to keep speaking out and sharing our reflections, learning, and growth.
Posted by Reading While White at 5:00 AM 2 comments:

The Messages We Receive and the Voices We Hear 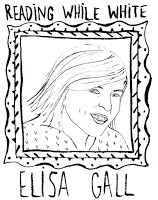 About a week ago, I learned through Alia Jones that Simon & Schuster re-released Popcorn by Frank Asch as a board book. If you’re unfamiliar with the book, it’s about a bear named Sam who hosts a B.Y.O.P. (Bring Your Own Popcorn) house party when his parents are away. The kids pop so much popcorn that it fills the home (and the book’s pages) before the partiers eat their way out of the mess. When Sam’s parents return home (with a surprise popcorn treat for him) he has learned a lesson that is as big as his stomach ache—but it’s not about cultural misappropriation. You might be wondering what costume Sam chooses for his wild-and-crazy Halloween party. Or maybe you already have predicted it:﻿﻿﻿﻿

Critical conversations about this book are not new. Discussions about the effects that costumes and other inauthentic First/Native Nations imagery and actions have on youth are not new. In “White America needs to stop assuming Native American culture belongs to them too” authors Dina Gilio-Whitaker (Colville Confederated Tribes) and Roxanne Dunbar-Ortiz explain that historically “playing Indian at its core reflected an inherent hatred of Indians, not love or affinity. From the Boston Tea Party forward, US Americans obsessed on vanishing Indians in a multitude of ways that translated into trying to become them, or at least using them to project new images of themselves as they settled into North America and left Europe behind.”

Around the same time I learned about the Popcorn re-release, I picked up Always, Abigail, a contemporary middle grade book by Nancy J. Cavanaugh. Less than 40 pages in I encountered a passage where characters pretend to do a "Native American sister ritual" complete with a made-up chant:


Oof.
A few days later I was making my way through my library's board books section and I came upon this title:
Double oof.


This was all happening while USBBY was responding to feedback about its “Indigenous Experience in Children’s Books” panel for the upcoming October 2017 conference in Seattle. (If you are unfamiliar with that situation you can read a summary and letters to USBBY leadership from Debbie Reese, Naomi Bishop, Naomi Caldwell, and Christy Jordan-Fenton at AICL.) USBBY conference organizers have adjusted the schedule since questions were raised, but it remains that there will be no American Native Tribal representation on the panel. Oof doesn’t seem to cut it.


This was all in about a week’s time - a week where I also saw a play based on Moby Dick which used the words “savage” and “cannibal” to describe characters from Queequeg’s fictional indigenous homeland, and where through Netflix I watched a contestant on the Great British Baking Show be commended for a “Wild West” themed cookie sculpture. I might not see it at every moment, but this disregard for First/Native Nations people is happening constantly. It is all around us, and all of us—kids and grown-ups alike—are soaking in the normalcy of it. Babies who grow up reading Spot end up being kids who read Popcorn, tweens who read Always, Abigail, and adults who fail to interrogate media which reflects cultures as costumes and fodder for play. This is not about good people and bad people—we all receive messages that influence how we see the world. But which messages will we notice? Which will we ignore? Which will we reject?


This week I ALSO found out about Fall in Line, Holden! by author-illustrator Daniel W. Vandever (Navajo). You can buy it here for your home or your library. I ordered a copy and I am excited to receive it in the mail, especially after watching this author interview in which Vandever discusses the importance of a contemporary story that also does not forget history. How many books like Always, Abigail and Popcorn are there in the world for every Fall in Line, Holden!? Too many. It’s not because of a lack of First/Native Nation creators and leaders. Those who are there need to be listened to and supported. They need to be given space on panels about their experiences and identities, and space on panels about other topics too. Imagine if there were twenty books like Fall in Line, Holden! or Hungry Johnny for every Spot book. Thirty Indian Shoes and In the Footsteps of Crazy Horse for every Always, Abigail. Instead of Popcorn getting re-released, imagine if publishers were investing in more books like I Am Not a Number, My Heart Fills With Happiness, We Sang You Home, Sky Sisters, Mission to Space, The Birchbark House, and more. These books might not always be available through your regular vendors or on Amazon, but they can be bought, placed face out on displays, given as gifts, added to reading lists, and read with children. Native books exist. Native voices exist. Do we see them? Do we make space for them? Do we listen to them?


I am reminded of a talk I heard journalist Jacqueline Keeler (Navajo/Yankton Dakota Sioux) give this spring. She asked the audience a question on which I continue to reflect, and I invite fellow non-Native folks to reflect on it too:

“If you realize you are a colonist, then what are you going to do about it?

Elisa Gall
Posted by Elisa Gall at 5:00 AM No comments: