Spotlight on #OwnVoices: Freedom Over Me 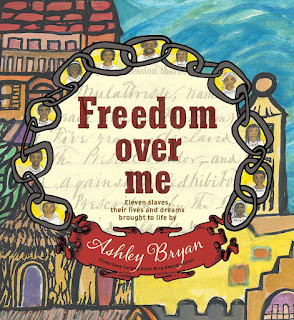 Peggy, John, Charlotte and child, Stephen, Mulvina, Jane, Athelia, Qush, Bacus, Betty. It is with little more than these names that this book began.

Ashley Bryan explains in his author's note that he acquired a collection of slave-related documents and found among them an 1828 estate appraisal for the Fairchilds: “Eleven slaves are listed for sale with the cows, hogs, cotton; only the names and prices of the slaves are noted (no age is indicated).”

From those names, Bryan imagines lives into being.

Each of the eleven African and African Americans—men, women, one teenager, one child—is introduced with a portrait and first-person narrative poem. The portraits show somber faces alive with fine lines, set against backdrops comprised of scraps of historical documents relating to slavery. On each portrait, the individual’s name and age appears at the bottom in a light, lovely script: “Peggy, age 48.”

In a book that emphasizes the full humanity of these individuals, that speaks the imagined truths of their lives but also gives weight and breath to their imagined hopes and dreams, the atrocity of slavery is represented first and foremost by that purchase price accompanying every portrait. These are human beings who are owned, who are “appraised” and assigned a dollar value like cotton or cattle.

The first-person narrative for each individual provides some of the details of her or his life as Bryan imagines it. Peggy is a cook in the Big House. She remembers her village being raided, her father being killed, being captured along with her mother and surviving the journey to America that many others did not. She is not only a cook, but a healer, and wanders the estate gathering herbs.

For each subject Bryan offers a second poem, a dream poem, and an accompanying painting that breaks free of all formality and sobriety in a vibrant, joyful scene. In “Peggy dreams,” Peggy reflects on her given name. She was Mariama before she came to America, which means “Gift of God.” She finds joy in relieving the suffering of her fellow slaves. “Mrs. Fairchilds's dinner guests / praise my cooking. / The praise, however, / that touches my heart / is to hear the slaves / call me Herb Doctor.”

“Bacus, age 34” ($250) is a blacksmith. He’s married to “Charlotte, age 30,” a basketmaker, and they have a daughter, “Dora, age 8,” with whom Charlotte is being sold ($400). Bacus knows of slave insurrections, has studied the stars and thought about running, wondering if all three of them can make it to safety. But he’s worried now about being sold and separated from his family. Charlotte learned how to weave as a child in Africa. Now the owners profit from her skill. She knows she and Bacus could earn enough to live in freedom if they can escape. Their daughter is “Dora” to the owners, but Charlotte and Bacus call her “Akua, Sweet Messenger.” When Charlotte is busy weaving, others in their community help care for Dora.

In “Bacus dreams,” the blacksmith tells how every strike of his hammer against hot metal is an outlet for his anger, a blow for justice. In “Charlotte dreams,” she speaks of her artistry as a means of self-discovery. In both dream poems the speakers note the distance and difference between how their owners see them, and who they are.

Enslavement weighs heavily on these individuals as Bryan imagines them—of course it does. The psychic brutality of slavery is at the foundation of this work. But what rises from its pages are eleven vibrant lives: people with history and hopes, dreams and drive, talent and tenderness. So, too, does a glimpse at the connections and community that help sustain them.

The institution of slavery sought to erase the humanity of those who were enslaved. Ashley Bryan brings that humanity into full relief here, because while there is no way of knowing what these individuals truly hoped and dreamed or who and what they loved, hoping and dreaming and loving is simply and profoundly part of what it means to be human.

I love this book. And this isn't even a criticism, and barely a niggle, but I keep asking: why does Bryan's note say that the document includes "eleven slaves" while the document itself, reproduced in the book, only includes ten? The character "John" is included in the book but is not among those listed in the document. I drove myself a little crazy with the counting ;-)

Another book that I like in a similar vein is FORTUNE'S BONES by Marilyn Nelson which gives voice to an African American whose skeleton was originally used for anatomy studies and then hung in a town museums for a couple hundred years.