Reviewing While White: Walk on Earth a Stranger, and, In the Footsteps of Crazyhorse 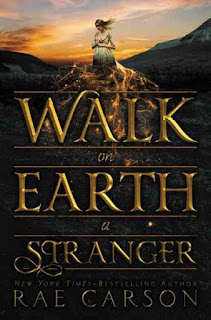 Rae Carson's Walk on Earth a Stranger was on the National Book Award longlist for Young People's Literature, and it came to my attention as Debbie Reese started posting her thoughts while reading it.   It made we wonder what made the book stand out to the NBA committee.  The Booklist review noted "world building" and "carefully constructed, well-researched aplomb" in a book with "a lot going on...from slavery, animal cruelty, and Indian bashing to heart-stopping medical procedures and gender and class issues."  Sounded like a fascinating read, if nothing else. I bit.

The book certainly delivers a well-constructed and wordy escape.  And it's romantic, in many senses of the word.  We know for sure exactly what kind of book this will be by p.47, when protagonist Leah  ("Lee") refuses childhood friend Jefferson's awkward marriage proposal: "He pauses. Turns. Sadness tugs at his eyes as he say, 'Seems like I've been waiting for you to come around my whole life, Lee. But a man can't wait forever and stay a man.'"

But the underlying romanticism in this book is the romanticism of the West, and to fully enjoy it the reader has to buy into the White man's pursuit and claim of land and gold as a noble cause. I think we're expected to excuse Lee for going along with it because she's a young woman trying to escape the clutches of an evil Uncle and of society's gender roles.  Oh, and she has this special power, that lets her sense gold.  So, she can't really help it.

Lee’s heartthrob and best friend from childhood, Jefferson, is "half Cherokee."  You must read Debbie Reese's conclusive post on this book for a full unpacking of the problems with how Carson portrays First Nations/Native people.  I find it particularly unnerving how this is delivered under a veneer of “respect.”  Lee is carefully and deliberately characterized as non-racist for her time as seems reasonably possible, by pointing it out in others:  p.59 "It takes a moment for me to realize 'boy' refers to his slave."  Or p.232 "Mama used to say that Jefferson had a noble dignity about him, which was her way of pointing out his Indian blood while pretending to be polite. He doesn't seem noble to me. He's just Jeff."  Debbie Reese does an excellent job of outlining how Carson, in what seems like an intent to assign blame across the board as if even-handedly…”gives us Indian people as a group who are horrible, versus specific White individuals who are horrible.”    They remain a “group” in this story, not individuals.   And Jefferson, while individual, seems mostly device.   When Lee says on  p.235 "I don't know what to think about the Indians. Seems to me we don't really know anything about them. We don't even know what we don't know,”  it seems clear Carson doesn’t know either, and this echoes like a sloppy excuse. 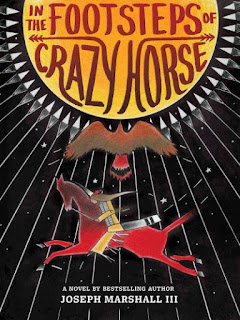 Joseph Marshall III’s In the Footsteps of Crazyhorse feels like a book I’ve been waiting for for a long time, and I was pleased to see it on School Library Journal’s Best of 2015 list. With a simple setup and straightforward prose, young Jimmy goes on a road trip with his Grandpa Nyles and listens to stories about the Oregon trail, and the famous battles that Crazy Horse took part in, and which are generally told in books for children from a radically different perspective.  I don’t recall reading a book for children that lays out the horrible details of these battles in a way that doesn’t “other” the Lakota and other First Nations.   Stop by stop, Grandpa Nyles takes Jimmy to visitor centers and historical markers to read  the information there, and then tell him “the way it was.”  At “Little Bighorn Battlefield National Monument” Grandpa Nyles describes the onset of the Battle of the Greasy Grass:

“Everyone at the south end of the village could hear the guns now. So much gunfire was not good and usually meant danger. So much gunfire usually meant enemies. It was better to think that and do something than to wonder and be confused. Enemies attacking were nothing new to the Lakota, Cheyenne, and Arapaho people.” p.93

This is such a different perspective on events than I have read in most books for children, in which Indians suddenly appear to battle. Throughout, Grandpa Nyles painstakingly elaborates instances of bravery and courage within an authentic context: not sensationalized, not stereotyped.


This book is labelled fiction, and it’s set up as a novel.  While the language is fluid and accessible, I found it light on character development and plot as commonly read for in our industry, and was feeling disappointed in that regard.  But about half-way in I realized I was reading it wrong.  It’s a history book, told in story, and one that provides a much-needed perspective lacking in most of children’s literature. Held next to Walk on Earth a Stranger it feels like a balm, and Carson’s novel’s raking othering of Indians in service of the romance of the West stands out even more starkly in comparison.
Posted by Reading While White at 3:06 PM

"It’s a history book, told in story" is more or less I have been describing In the Footsteps of Crazy Horse. Felt like nonfiction with the contemporary story of road trip of Jimmy and his grandfather as the connecting thread. I'm using it along with Erdrich's Game of Silence and Bruchac's Heart of a Chief in a literature circle unit next month.