Thoughts on "But kids say this stuff!!!" 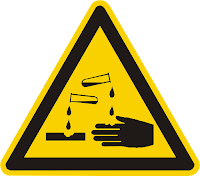 I frequently debate colleagues (in all spheres and via all media) on individual books’ merits/defects/quality/worthiness/appeal. With disturbing regularity, I raise a concern that a character has said or done something bigoted or racist, and that the book has not countered it. With disturbing regularity, I get a response along the lines of “but kids actually did/said/do/say this stuff!”

Accuracy is not the issue. When we see something problematic, we need to say, “that’s a problem.” Unless books name problematic content as such, they condone and perpetuate the problems.

You’ll lose me if I say “This is problematic and doesn’t name it as such” and you respond “Yes, but it’s accurate” (see also my comment on “yes, and” vs. “yes, but” here).

One example is the image of Grace as "Hiawatha" in Amazing Grace. 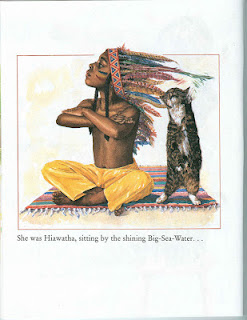 I'd never deny that some kids played and play "Indian" like this.  And I'll always assert that playing "Indian" like this is a problem.  And what messages does this image send to Native kids whose teachers read Grace aloud?  According to the American Psychological Association, "the continued use of American Indian mascots, symbols, images, and personalities establishes an unwelcome and often times hostile learning environment for American Indian students that affirms negative images/stereotypes that are promoted in mainstream society... the American Psychological Association supports and recommends the immediate retirement of American Indian mascots, symbols, images, and personalities by schools, colleges, universities, athletic teams, and organizations." Let's stop talking about accuracy and start talking about impact on kids.

Ed. 2/12 7:30am: I should mention that the U.S. 25th Anniversary Edition of Amazing Grace does not include this image.  I think this is a smart move, not to mention the right thing to do.

Lastly, take a hard look at that “kids actually do this” phrase. Who are “kids” in that sentence? It usually refers to kids who aren’t marginalized along the identifier being stereotyped or mocked. And that defense then reiterates the centering of non-marginalized kids. Which is the problem in the first place.

Believe it or not, I’m not arguing that we should erase the world’s problems from children’s literature. I don’t think books have the responsibility to present a problem-free world; in fact, I firmly believe that children's literature (and society as a whole) should be more upfront and direct about injustice and racism.

I’m not a fan of sugarcoating the world; I just like to point to the corrosive acid and say “hey, that’s not sugar.”

Good post. The only part I'm not sure about is the paragraph that starts "Lastly". From my own experience (and if there has been research done on this, forgive me), I have witnessed this unfortunate behavior universally. It doesn't seem to be limited to those who are non-marginalized.

Yes, I see all kids participating in racist mocking, sadly. Speaks to how kids are sponges, try things on for the effect, without fully understanding what it is they are participating in.

Sorry it took me 4 days to answer you, Jamalia! I actually thought of this while I was writing. And while I agree that behaviors like the ones I name in the post are exhibited universally, I still believe that they are the inventions of people who are not marginalized along the identifier in question. It's hard to imagine pre-Columbus Native children saying "let's play... ourselves! But a sick, distorted version of ourselves!" There's a dominance merely in the fact that these sorts of games exist. That's the larger point, and I should have written that paragraph as such.