I'm sure we've all had the experience of setting out to buy a favorite book as a gift for a child or a teen -- or replacing a worn library copy of a popular item -- only to find out that the book is out of print and no longer available.

This seems to happen with even greater frequency with books by and about people of color and First Native/Nations. Joseph Bruchac's memoir Bowman's Store: A Journey to Myself was published by Dial in 1997 and went out of print so fast it never had time to find its audience or work its way into the secondary curriculum -- and this in a time when teachers were crying out for authentic books about First Native/Nations for their classrooms. Luckily, Lee & Low managed to bring it back into print just four years after its original publication, and it's been in print and available from them since 2001.

Just this fall Lee & Low has brought back into print another great book, Mama and Papa Have a Store by Amelia Lau Carling (as well as the Spanish language version La tienda de mamá y papá, with the translation by Carling as well).  This exceptional picture book recounts part of the author/illustrator's early childhood in Guatemala as a member of a second generation Chinese immigrant family. It was originally published by Dial in 1998 and it won the Américas Award, as well  a Pura Belpré Honor for illustration in 2000. In the early years of the award, there were so few Latinx books that the Belpré Award was given every two years so there would be a large enough pool from which to choose. And there were times when one of the awardees would already be out of print by the time the award was announced. 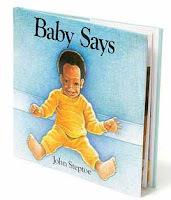 But Lee & Low can't bring every great book back into print.

I always want to buy John Steptoe's brilliant picture book Baby Says (Harper, 1988) as a gift for every new baby I know. But I can't because it's been out of print for years and I can't afford the $47.50 used book dealers are asking for for it on Amazon. It's a shame Harper never had the foresight to issue it as a board book. They wouldn't even need to change the trim size or truncate the text. How can we let publishers know that we want these books when we can no longer buy them to demonstrate that?  Diverse books need to stay in print longer than they currently do, and they need to be available in paperback and board book editions, too.

With this in mind, we're launching a new series on Reading While White called "Bring It Back!" We hope to call attention to the great  #OwnVoices books we have on our library shelves which have all too quickly disappeared from the stores and warehouses. Because it's not just that #WeNeedDiverseBooks.  #WeNeedDiverseBooksToStayInPrint.

Posted by Reading While White at 2:20 PM

Email ThisBlogThis!Share to TwitterShare to FacebookShare to Pinterest
Labels: Bring It Back!

The one I want back is Joyce Hansen's The Captive. I get every used copy I can for my students.

THE GIRL WHO WORE SNAKES, by Angela Johnson and illustrated by James Ransome. Such an unlikely title and story (Ali falls for the snake the zoo man brings to school one day and saves up till she can buy her own), but the lyricism of the text and the drop-dead gorgeous illustrations mesmerized kids and adults in storytime.

A key component of your message is "How can we let publishers know that we want these books when we can no longer buy them to demonstrate that?" It is probably most important to know who are the decision-makers at the publishers. When we are in contact with these folks at conferences, for example, or online, we should have specific titles and rationales in mind, and supporting material from the author and/or illustrators of these books. We are a strong voice and these are the kinds of tangible differences we can make.

Publishers are in the business of making money, of course, but they too are people who are largely reasonable and want to get the right books in the hands of the right children. I believe there used to be an out-of-print discussion group at ALA but I don't know if that has dissolved. It's too bad there is not a clearinghouse somewhere - maybe RWW could create a Google Sheet or something that we could keep a running list of titles/authors/illustrators/publishers etc.

Snow on Snow on Snow, by Cheryl Chapman and Synthia St. James. I read this one at a YMCA preschool that with (in this order) Latino, White, Asian, and Black students. They LOVED looking for Clancy. The one black boy in one class said with surprise, "That boy [the protagonist] looks like me!"

Baby Says is available on eBay for 7.99.