Reviewing While White: Loving Vs. Virginia by Patricia Hruby Powell 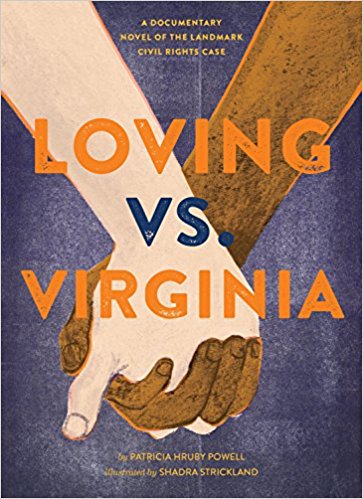 One of my favorite podcasts is Politically Reactive hosted by comedians W. Kamau Bell (who has a new (adult) book out this season) and Hari Kondabolu.  The duo take on big contemporary issues with a healthy dose of humor.  There are plenty of episodes that make me laugh while simultaneously producing outrage.  In a recent episode the guys talked with Black Lives Matter co-founder Patrisse Kahn-Cullors about a range of issues including the erasure of Black women’s voices historically (such as Fannie Lou Hamer) through to the present moment (including BLM).

Thankfully Fannie Lou Hamer’s words are available to youth in Voice of Freedom: Fannie Lou Hamer, Spirit of the Civil Rights Movement, written by Carole Boston Weatherford and illustrated by Ekua Holmes (Candlewick Press).  When I read Weatherford’s book I was stunned by Hamer’s story and that I had never read or heard anything about her.  Weatherford and Holmes reclaimed a voice that was nearly lost to us. Voice of Freedom is an example of the  potential of youth publishing to uncover stories and voices that have been suppressed. It set a promising standard for future books.  This is why I found myself with a mixed reaction to Loving vs. Virginia:  A Documentary Novel of the Landmark Civil Rights Case by Patricia Hruby Powell, illustrated by Shadra Strickland.

Powell does an admirable job of crafting a narrative of this interracial love story. It is ideally suited for a young adult audience.  The lives of the Lovings in picture book form never really worked for me. Powell has shared why she wrote this book as a documentary novel:

“I could show the two falling in love and running through the woods at night. I could show Sheriff Garnet stopping Richard’s car and saying about Mildred, “Who you got in there?” rather than just writing that the sheriff was racist and stopped black people in cars in order to intimidate them. In a “documentary novel,” I could show all this and also create dialogue that draws the reader into the emotional heart of the story.”

Accompanied by Strickland’s illustrations, these imagined scenes do serve to make the story more novelistic.  Do they serve to effectively document the past?  I’ve learned from many wise book evaluators that we must consider a book as it is and not as we wish it to be. Powell’s stated purpose was to add fictional elements that would string together the historical record.  She has accomplished her purpose on the fictional side. The beautifully illustrated fictionalized scenes are joined by period piece photos and newspapers. The book falls short when it comes to expanding the historical record. Why write a documentary novel if not to enlarge the factual knowledge about events?

My disappointment is the information that was gathered but left out.  The acknowledgements by Powell reveal that she has done the hard work of a documentarian - beating the pavement to interview many people associated with or connected to the Lovings. Specifically, she met with members of the Rappahannock Nation, yet this thread of the narrative is missing in the story.

There are many unanswered questions about Mildred Jeter Loving when it comes to her tribal ancestry.  Debbie Reese* has done exhaustive research on this topic at her blog American Indians in Children's Literature.   Here is a succinct timeline by Dr. Reese that highlights the conflicting social and political identify issues of a bi-racial woman in the U.S.

“In the 1950s, Mildred Jeter said she was Indian. We don't know if she said that out of a desire to avoid being discriminated against, or if she said that because she was already living her life as one in which she firmly identified as being Indian. Either way, it is what she said about who she was on the application for a marriage license.

In the 1960s, because Mildred Jeter and Richard Loving's marriage violated miscegenation laws, their case went before the Supreme Court of the United States. To most effectively present their case, the emphasis was on her being Black.

In the 2000s, Jeter and her children said they are Indian, and specified Rappahannock as their nation.”

This raises so many questions about the life of Mildred Jeter Loving. The information that was gathered by Powell from Rappahannock voices was left out of this story. I don’t believe this was a purposeful erasure by Powell.  Erasing First/Native Nation voices and lives is so deeply rooted in White culture it continues to happen with little conscious thought by most of us White folks. What is the purpose and promise of a documentary novel for children and teens?  To me, this documentary novel would reveal more about the Rappahannock Nation and Jeter's connection to it, and explore why Jeter felt the need to avoid the discussion amid the politics of the 1960s.

*We’ve received some criticism here at RWW for relying heavily on Debbie Reese’s scholarship on First/Native Nations.  For me there are two simple reasons I point to her work.  1.) She has done more research on this topic than anyone else I can find. 2.) She has influenced my thinking on this topic and I MUST give visible credit to her.  To do otherwise would mean erasing her voice (for more about how White men have systematically robbed the intellectual work of Persons of Color or First/Native Nations look at Hidden Figures or Breakthrough! How Three People Saved “Blue Babies” and Changed Medicine Forever by Jim Murphy.)
Posted by Ernie Cox at 5:30 AM

I want to highlight this and clarify that these books mentioned by Ernie offer accounts of the erasure of POC contributions. On less careful reading it might sound like these books serve as examples of committing such erasure: "for more about how White men have systematically robbed the intellectual work of Persons of Color or First/Native Nations look at Hidden Figures or Breakthrough! How Three People Saved “Blue Babies” and Changed Medicine Forever by Jim Murphy."

I wonder if maybe the criticism that the picture book "The Case for Loving" by Selina Alko and Sean Qualls, received played into Patricia Powell decision to shy away from including the First/Native Nations information she gathered. Or if it was not even on her radar. Have you contacted Powell with regards to this?