What To Look For In Data About Diversity In Publishing? 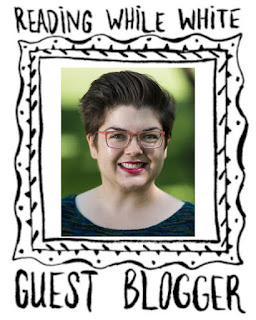 Today, Reading While White is pleased to welcome guest blogger Amy Koester for a discussion of the 2017 CCBC statistics. This post is part of our end-of-year retrospective series.

The beginning of a new calendar year is rife with end-of-year summaries, top ten lists, and other pieces meant to help us put the work and output of the previous year into context. This holds true for diversity in publishing, too, with the anticipated release of CCBC data on children’s books written by and about BIPOC in 2018. As we prepare to consider these newest statistics, we can take some time to consider changes we’ve seen over the course of previous years’ CCBC numbers as well some other pieces of data that can help us to see whether the publishing ecosystem is diversifying.

What do the CCBC stats tell us?

Before anything else, it’s important to recognize that the CCBC does not receive every single book published for children in a given year--so the stats they share represent data about a significant sampling of children’s books, not the full roster of what's published. People looking at this data should keep this in mind throughout any perusal and analysis of the data. One must understand what sampling the data sets represent in order to truly learn anything from them. (For some additional context, the CCBC gives this further clarification about what materials they receive and are counted in their data: most of the trade books published in the United States, some series and formula non-fiction books, and some books from Canadian publishers who distribute in the U.S.) That said, the CCBC data is the most comprehensive data set available about books published for children in a given year, and so this data is our closest proxy to all of publishing for children.

When I’m looking at CCBC stats, I usually use 2015 as my starting place--that’s the first full year for which We Need Diverse Books was in existence, and it’s also the year we got the first set of data about diversity in the publishing field (more on that below). If 2015 could be considered a year in which diversity across the children’s publishing ecosystem became a high profile priority, how do current practices compare? Until the 2018 CCBC data is available, we’ve got the 2017 numbers for comparison. 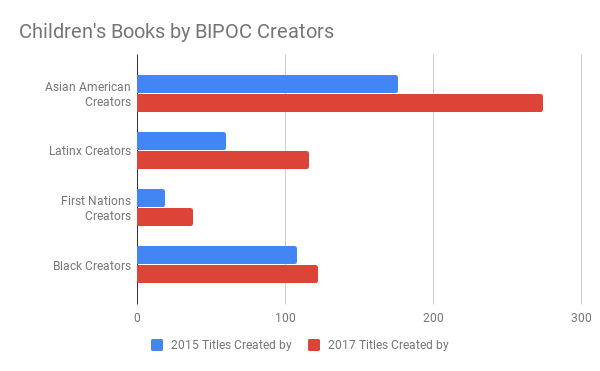 What questions do these data about BIPOC-created books raise? Questions for further consideration and research include: 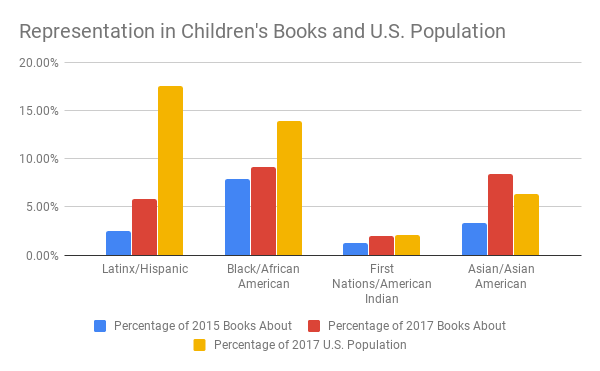 It’s imperative to remember two other things in considering these CCBC data:
What questions do these data about books about BIPOC raise? These questions are areas in need of further consideration and exploration:
If we were to break down the about data even further, what would we find in terms of the types of stories being published about BIPOC? For example, what proportion of books about Black characters and experiences are stories of slavery or the civic rights era versus contemporary stories that normalize, not historicize, Black experiences? Similarly, what proportion of books about First Nations characters and experiences take place in modern settings as opposed to historical accounts of First Nations peoples? (To be sure, there’s nothing inherently wrong with historical stories about BIPOC; it is problematic, however, when the majority of stories portray BIPOC as groups relevant only at particular moments in history and/or without presence in today’s increasingly diverse reality.)

Considering diversity in the publishing industry

The number of books published by and about BIPOC is only a piece of the larger children’s publishing ecosystem--to truly transform publishing and ensure that great books by and about BIPOC can get into libraries and the hands of kids, representation among publishing professionals is important to consider, too. In 2015, Lee & Low conducted a Diversity Baseline study to capture demographic data about those employed in the publishing industry at that time. It’s interesting data to look at, and it’ll be the basis for comparison when, later this year, they’ll issue the second survey to capture what the industry looks like four years later. Until we have that comparison data, we’re left with more anecdotal and subjective descriptors of the publishing industry. One such example is this recent article from Publishers Weekly that compiles the stories of how various publishing industry folks got into children’s books--and the folks sharing their stories are overwhelmingly White. Regardless of whether the forthcoming Lee & Low data indicate a publishing landscape dominated by White professionals, articles like this serve to reinforce a narrative of publishing as a White field. That impacts how we think about the larger publishing ecosystem as it relates to diverse books for children.

Thinking about publishing as an ecosystem also calls into question the role of librarians and those involved in youth librarianship. What does it say about youth librarianship when we look for changes in publishing--we want to see more and learn more about diversity in children’s literature--but do not necessarily look for changes in our own practice and how we contribute to this landscape? What can and should we, as library practitioners, be doing to demand and support more systemic change?

As we head into a new year of publishing, the ALA Midwinter Meeting and all the publishing promotion that happens there, and the anticipation of the second round of data on diversity in publishing from Lee & Low, we should all be intentional about considering the different data we’re seeing and what stories they can tell about whether and how we’re moving the needle toward a more diverse ecosystem of publishing books for young people.

-Amy Koester works at Skokie Public Library as the manager of the Learning Experiences Department. She is currently wrapping up her term on the board of directors of the Association for Library Service to Children. She is a member of the editorial board of In the Library with the Lead Pipe, an open access, open peer reviewed journal on librarianship.
Posted by Reading While White at 5:00 AM