NOT RECOMMENDED: On the Other Side of the Forest

CONTENT WARNING: This review contains descriptions of anti-Black stereotypes and links to the Jim Crow Museum of Racist Memorabilia at Ferris State University. 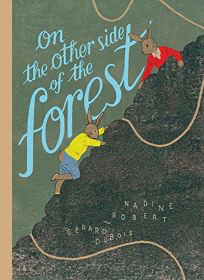 On the Other Side of the Forest by Nadine Robert and Gérard DuBois is a Canadian French translation. Arthur and his dad–two brown-furred rabbits–live among fellow anthropomorphic rabbits (and their dog Danton) in a clearing surrounded by a forest. Rumors of scary creatures in the woods abound (“No one ever goes in there!”) but nobody from the village has ever discovered what lies beyond.

Arthur’s dad, a curious wheat farmer, has the idea to build a tower so that they can peer over the trees and see the other side of the forest. The rabbits harvest the grain, grind it into flour, and bake bread to barter for stones. They spend their off-hours constructing the rock tower: “It’s very tiring. But a magnificent idea takes a lot of work.” When a storm wrecks their progress, the villagers, now full of bread and interested in the exhausted pair’s endeavor, help finish the job. Suspense builds as Arthur and his dad ascend the finished tower and a new truth about their surroundings is revealed.

The first person narration and short, rhythmic sentences pace the story. Illustrations resemble oversized block prints on distressed, vintage-looking paper, and function as oversized rectangular panels with a crisp white border. Bright reds, blues, and yellows pop atop an otherwise muted color palette. Characters’ outfits and activities (hoop trundling, for example) evoke an old-timey atmosphere. Much of the book reads like a story of discovery, with themes of community, ingenuity, and exploration. BUT––this is not true of the complete work. There is one spread of this book that includes racist imagery that distorts and overpowers everything else. 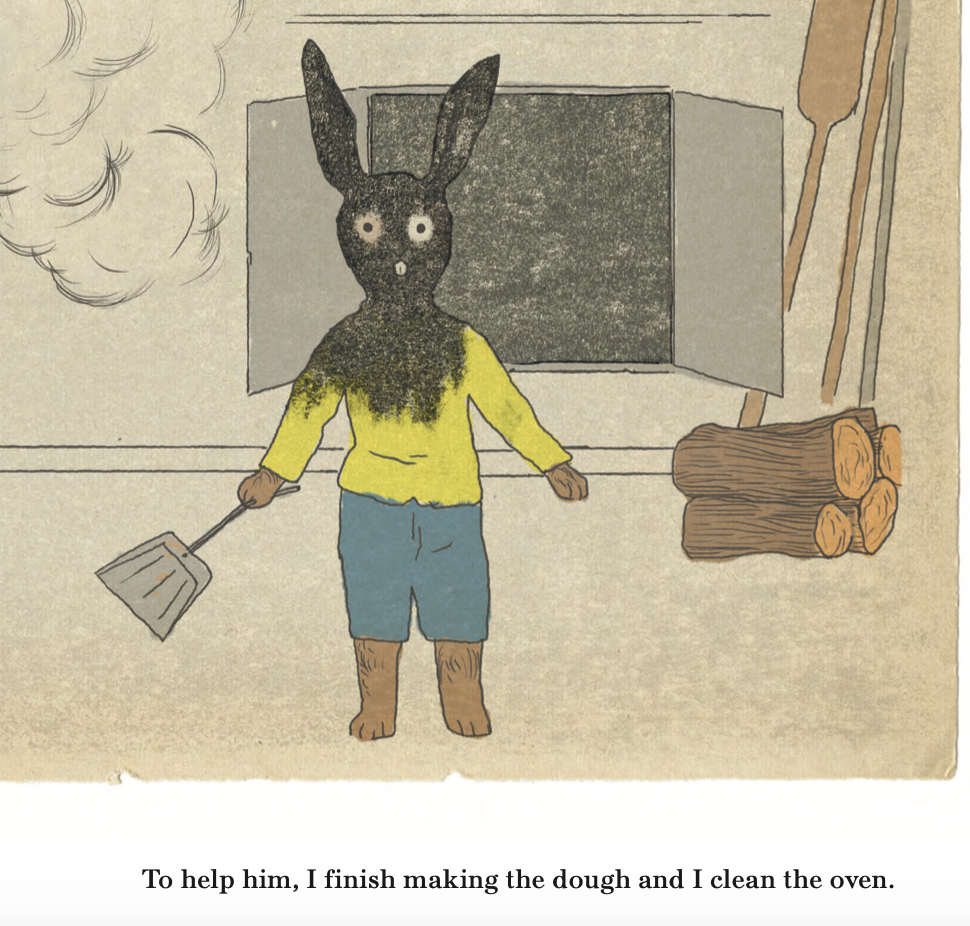 In the spread, Arthur’s dad has fallen asleep and Arthur works in the kitchen to help him make bread. The text, told from Arthur’s point of view, reads “To help him, I finish making the dough and I clean the oven.” The art depicts Arthur looking straight ahead, with white teeth, exaggerated white round eyes, and a coal black-colored face, ears, and chest.

When I first came upon this page, I thought of a racist image that I had learned about from the Jim Crow Museum’s online database of racist cartoons. Arthur’s appearance after oven-cleaning is positioned as a humorous moment in the story too–this is disturbing! What about having black fur (or skin) is humorous? That the color is temporary–something that is later washed off–also brings up connections to blackface minstrelsy.

Once I encountered this page, I could no longer in good conscience enjoy or recommend this book. The charms that I had found in other elements of the book–like the reds, blues, and yellows popping atop the muted color palette–became harder to discern. It isn’t because those colors aren’t vivid, but because craft and context are always intertwined. It takes a great degree of privilege to compartmentalize–to celebrate some elements of a racist work while ignoring the racism. Whiteness often positions this particular type of compartmentalization as “objectivity.” This has the consequence of allowing white people like me to ignore anti-racist critique and believe (even if subconsciously) that our position is neutral, noble, and/or superior. It could not be farther from it!

Seeing this title reminded me of conversations around another book: The Bad Mood and the Stick by Daniel Handler and Matthew Forsythe. After the original book cover was released several years ago, Edi Campbell’s writings and the work of other online activists moved the publisher to change the art. I hope that happens here.

Some readers might ask, “don’t you care that On the Other Side of the Forest was on the 2021 New York Times/New York Public Library Best Illustrated Children’s Books list?” I do care, but not because I think an award makes a book infallible. I care that a group of people examined this book and either didn’t see the issue at hand or didn’t care enough about it to add a different book to the list instead. I care about the anti-Blackness that this book normalizes, because it is wrong. I care about the readers who have to deal with the consequences of a racist book receiving accolades and showing up in classrooms and libraries.

The creators might not have intended for this art to communicate these messages and connections, but intent is irrelevant. The reality is that this image has a racist impact. And whether or not we are conscious of it, we are all taking in messages from our reading and surroundings every day, and these messages direct our thoughts and our behaviors. Kids are receiving these messages too, in ways that are influential to their development and critical to their self-esteem and perception of others.  What messages are sent when the white-dominated children’s literature ecosystem continues to uncritically praise books with racist imagery?

Posted by Reading While White at 6:45 AM


It's really a nice and helpful piece of information. Thank you