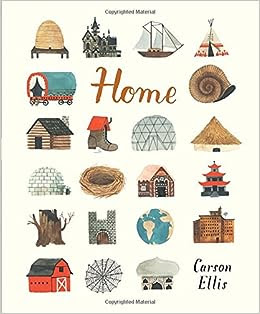 Home (published by Candlewick Press) is Carson Ellis’s first book as both author and illustrator, and it is generating a fair amount of Caldecott buzz, as evidenced by its standing on the Goodreads Mock Caldecott list (12th out of 69 books as of November 17). And understandably so: it’s an auspiciously beautiful debut. You can tell just by touching this book: Ellis and her editors at Candlewick Press obviously took great care in its design. The paper is a lovely cream, nice and thick, pleasing to the touch. The bibliographic information tells us that Ellis hand-lettered the entire book, which is pretty impressive to me (my handwriting is abysmal). Turning to the first spread, we see two horses racing away from a small country home with a dove flying away from the house (a dove that the observant reader will find in nearly every illustration). This lovely scene is more than a little reminiscent of the work of Alice and Martin Provensen. (According to Erin and Phillip Stead’s excellent Number 5 Bus series, where Ellis spoke at length with Mac Barnett, the Provensen-esque art seems to have been a conscious choice.)

A bit later in the book, a full page spread shows a large boat headed for shore; judging from the wash hanging on a line, the lookout gazing through an eyeglass, etc., it appears that the boat is looking to land and perhaps set up roots. But there’s someone already on the land: three people (clearly meant to be from First/Native Nations) wait at the head of the long, earthy slope, looking toward the approaching boat. The text reads, “Some homes are boats. / Some homes are wigwams.” A flock of birds ascends overhead, including the ubiquitous dove. Now, if I’m not very much mistaken, the dove is usually a symbol of peace. So what is going on here? Is Ellis making a political statement? If so, what is it? Is she trying to show peace between the (mostly) White members of the boat’s crew and the people of Native/First Nations on the land? But that would be revisionist history to the extreme! And about that crew: would there really be people of color out on deck, dressed in clothes just like the White sailors’? Or would they be in chains down belowdecks? I’m puzzled… and I’m an adult who studies children’s books as a part of my vocation. What of the child who sees this? What will they surmise from this baffling illustration? And what if the reader is a child of Native/First Nations, or a descendent of the Diaspora--how will these images register? 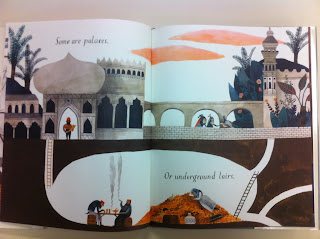 Turn the page and you’ll see another full page spread, this one apparently meant to take place in the Middle East. A shirtless man (with brown skin) stands holding a scimitar, guarding something, perhaps the ladder down to the “underground lair” featured at the bottom of the illustration. There is even a lamp (ala Aladdin and Robin Williams) on a table, where some nefarious-looking (also brown-skinned, natch) men are counting coins. Again: what is going on here? Does Ellis realize the misconceptions that she is reinforcing with this spread? In a country where Arabs receive death threats after pretty much any terrorist attack, how is this a good idea?

The homes themselves are pretty amazing. For instance, the “Japanese businessman” stands in front of a radical, stone-looking, geometrically fascinating piece of work. And… oh, wait. The “Japanese businessman’s” eyes are closed… it almost looks as if he is squinting. Yeah, that’s a pretty offensive stereotype too. Oy. And then there’s the white-toothed, smiling, poor-but-happy Kenyan blacksmith. Oy vey.

I’m embarrassed to admit I glossed right over all of this on my first read. I am a White man with all of the privileges that come with the position, so to speak, and I often miss things that I really should see in books. I’m getting better, but I’m still numb to so many problematic things.

In all the recent discussion on A Fine Dessert, this was a popular excuse for the book’s defenders: “I didn’t notice this, the kids I was reading to didn’t notice this [bonus points if said kids were not White!!!], so it can’t really be that harmful, right?!” Wrong. It still hurts, folks.

In January, Julie Danielson interviewed Ellis for Kirkus. Ellis mentions a few people in the interview: her editor at Candlewick, Liz Bicknell; and Mac Barnett and Jon Klassen, who provided “mountains of feedback and support” during the making of Home. I’m familiar with these three folks, especially Barnett and Klassen, who consistently produce top-quality, wisely created books. And I believe that Ellis is ultimately the responsible party here, but I wonder if Bicknell, Barnett or Klassen ever questioned Ellis on some of the problematic parts of the book. I wonder if anyone else along the way saw anything wrong here.

Debbie Reese reviewed this back in the Spring. That review was an eye-opener for me. I’m grateful for Debbie’s persistence in pointing out the problematic content in children’s books despite comments like this. (On a related note, don’t use this book to teach your kid/your class point-of-view. Just don’t, okay? I’m sure we can brainstorm a ton of infinitely less problematic titles that could do just as well in that regard.)


As beautiful as this book is, as talented as Carson Ellis undoubtedly is, there is more than enough troubling content in Home to cancel out the aesthetically pleasing bits.
Posted by Reading While White at 5:00 AM

Hmmm. This Reviewing While White series is kinda interesting. 5 posts so far, 1 positive (Eerdmans), 4 negative (3 Candlewick, 1 Lerner). Any chance we might muster up the courage to go after the Big Five?

That's interesting, Jonathan! But I assure you, as we are talking about books to review we are not really discussing the publisher... it's all about the individual book and how it is presented. All I can tell you is, stay tuned!

This is a really good critique, except for one thing: "And about that crew: would there really be people of color out on deck, dressed in clothes just like the White sailors’? Or would they be in chains down belowdecks?"

It's my understanding, thanks to blogs like medievalpoc over on tumblr, that the idea that people of color in European and American history were only ever slaves is actually a really harmful stereotype. So showing people of color living and working alongside White people in historical contexts other than slavery is not only a positive message, but historically accurate.

I do agree that the spread described there, with a ship carrying settlers approaches a place where First Nations people already live, sounds very problematic for the other reasons mentioned. I just don't think that having people of color on deck with White people is one of the issues in that particular instance.

Thanks for your thoughtful comment, Sarah, and also for the heads-up about medievalpoc... how did I miss that? I just fell down a wormhole and, before I knew it, had spent about half an hour on there (and the NPR piece from 2013). Fascinating stuff! It certainly is a complicated subject, and I am most assuredly not trying to be in the business of reinforcing painful stereotypes.

I immediately pulled the book of the shelf to take a closer look. I have to agree that the Middle Eastern and Japanese pages are problematic. The peace dove? It's in every spread, a unifying theme.

Questions about POC dressed like white sailors on board a ship headed for an American coast seems a reasonable response.

However, Sarah's point is well made. And it would be wonderful to see representations of POC in children's books outside of slavery that are historically accurate.

My hope is that as deficiencies are pointed out, publishers will consider the wisdom in increasing diversity among their staff. Such a move could make these books a delight for a wider audience.

I love medievalpoc--an absolute treasure. Even today people insist that we (poc, Black in particular) did not exist in certain areas and period of times--no matter what facts or common sense says. So I agree with Sarah that that illustration, at least, is a step in the right direction, though some of the other ones mentioned/shown definitely have problems.

That Middle East one--just... what? I can't believe any part of that panel passed muster (also, what is the significance of the woman laying on the heap of gold?)

Thank you. I am becoming concerned that RWW may be inadvertently revising history. Your message is important.