Reviewing While White: "An Invisible Thread Christmas Story", aka, "A White Savior Christmas" 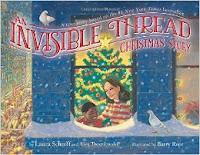 In 1986, then-six-year-old Maurice Mazyck stood on a Manhattan street, asking strangers for money and food.  Laura Schroff, who worked in advertising, bought him a meal.  She continued to buy him meals every week for the next three years.  The two formed a mutually-valued relationship.  Forth they went, together.

Here's a bullet list of what I caught in An Invisible Thread Christmas Story:

Feel free to add anything I missed in the comments.

When he arrives at Laura’s sister’s big, beautiful house, Maurice thinks “This has to be the luckiest family in the world.”  Yes, we White folks are very lucky.  Nothing else.  Not smarter.  Not more moral.  Not more capable.  Not more deserving.  Just luckier.  And the creators of An Invisible Thread Christmas Story capitalize on that luck.  They choose to ignore the systems and structures that keep White people “lucky”, and they profit on a narrative that portrays a lucky White person as a generous, loving, savior and a Black person as a grateful recipient of White generosity.  This is no act of kindness.  This is, quite simply, an act of racism.

Outstanding article. White Savior stories are ubiquitous and pernicious in our culture.

If it's a true story, I'd like to hear the reasons Maurice chose to not be a part of writing or illustrating it. Or if he was not offered the opportunity to collaborate.

Let's split some hairs here. A man of any color approaching a six year old girl of any color is going to be seriously scrutinized or arrested. But yes, a black man with a white girl more so. A black woman approaching a white six year old boy is not going to be arrested. So some of what protects Laura is the fact that she is a woman.
Second hair -- an act of kindness is an act of kindness, regardless of the social and institutional causes which created the situation in the first place. Would the reviewer have a person turn away from a child in need and turn away from his/her desire to reach out simply on the basis that it is not "politically correct"? Let all of us help those in need in front of us, every opportunity we get, and at the same time, advocate for change and reform in issues of racial injustice, both in the personal, social, and institutional arenas, and be willing to keep the dialogue open through all of these venues, and also in our personal lives, with our friends of all races.

Unknown @ 9:20, speaking as a man who once worked at a child care center and was not allowed to change diapers because of my maleness (theoretically because they could do background checks on all their employees, but male employees still couldn't be trusted?), I still think that the biggest reason Laura is "protected" in this situation is her Whiteness. But you admit that you're splitting hairs, so I will agree that a VERY small part of what "protects" her is the fact that she is a woman.

I do wonder about your second example, though. While the world has admittedly become a pretty cynical place and I'm as big a fan as anyone else when it comes to acts of kindness, I think you're making a Grand Canyon-sized leap when you infer that criticism of this book is the same as turning away from a child in need. Bookmakers are going to make bad books about good deeds... it happens. But that doesn't mean we can't question the decision-making that led to it being a bad book. (And I'll tell you, this book is pretty bad.)

I'm with you on your last sentence, though!