Reviewing While White: See No Color 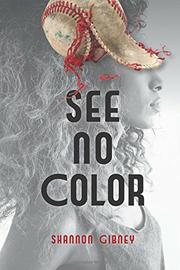 In See No Color, author Shannon Gibney explores the myth of colorblindness in the context of transracial adoption in a story about Alex(andra), a biracial teen who was adopted by White parents as a very young child.

Alex has two White siblings, a brother who is also in high school and an eleven-year-old sister.  For her family, Alex is simply Alex, the sister and daughter that they love. There are so many small ways in which Gibney conveys that love, and the familiarity and knowledge that are part of being a family, through Alex’s eyes.

Alex’s parents are not only hesitant but ill-equipped to talk about race. When her dad points out, “you’re only half black,” Alex assumes he’s trying to minimize her Blackness, as if there is something wrong with it.

When Alex starts dating Reggie, a Black player from another baseball team, she lets him believe her parents are a mixed-race couple. It sets the stage for a series of small lies she keeps telling to steer him away from meeting her family. She doesn't want him to know she's adopted by White parents; she can't even articulate why.

Dating Reggie is eye-opening for Alex, not just because it’s the first time she’s really fallen for someone; it’s also the first time she’s spent time socially with Black people. There is a vibrant sense of warmth and energy between Reggie and his mother, and an undeniable difference culturally. When Reggie’s mom says “nigger” in the context of a funny exchange between her and Reggie at the dinner table, Alex drops her fork in alarm and has to go to the bathroom to recover.

It is also at Reggie’s suggestion—because Alex complains about how hard her hair is to manage—that Alex makes her first trip to a Black hairdresser, the same one his aunts go to. Her mom drops Alex off into a community of Black women that is foreign to their family. The woman working on her hair tries to ease Alex's anxiety and get a sense of what Alex wants. The problem is that Alex isn't sure herself. She emerges with relaxed hair. She hates it.

Alex has also discovered a series of letters her Black birth father wrote her over a number of years (he tracked her down because she’s been in the news for her baseball skill). She can’t believe her parents have withheld them from her. It doesn’t matter to her that her birth father was in violation of  the rules by trying to contact her while she’s still a minor, or that her parents saved the letters (clearly a point of disagreement between them), intending to give them to her when she was older.

She wants to meet him.

Gibney, a mixed-race transracial adoptee herself, skillfully and courageously navigates the emotional terrain of Alex’s story, going to hard and challenging places. The result are some scenes that are unforgettable to me, such as Alex’s discovery of her adoption papers (she looks hard for them), which include how much the adoption cost, and the realization that she was labeled “special needs” because she is mixed race, and therefore it cost less than adopting a White child would have. Alex’s pain at the discovery of these facts is palpable, and she has no one with whom to talk about them.

Alex secretly travels to Michigan to meet her Black birth father, who has turned his life around since she was born. She meets his Black wife, who welcomes her; meets her younger half sister, who immediately makes Alex try to feel at home. But it’s not home. Not family. Theirs is a different family culture; different values; different rules. She will probably go see them again, but they cannot solve this puzzle of identity, which is as much about feeling as fact.

It’s only when she goes to the library to research more about adoption that things begin to shift for Alex. And it happens by accident when a young Black woman shelving books overhears Alex’s hesitant inquiry and later approaches her offering to help. It turns out she, too, is a transracial adoptee. She understands what Alex was really trying to ask, and shows her a web site about transracial adoption where, finally, Alex begins to find affirmation for what she’s been feeling.

I do have some quibbles and concerns with See No Color. I found the setting of Madison, Wisconsin, to be generic rather than specific in execution, but that’s because I live here. Alex’s sister Kit, the only one in her family who seems to understand Alex’s need to talk about race and identity, is unbelievable to me as an eleven-year-old. Many adults aren’t as insightful and mature as Kit. An even bigger concern for me was the storyline with Alex’s birth father, which felt more plot device than organic to me, especially in comparison to the rest of the story.


But the emotional authenticity of See No Color ultimately defines this novel that breaks new ground in young adult literature about adoption, giving visibility and voice to dimensions of that experience that have never been so honestly articulated. I hope we see more books moving forward; Gibney’s novel, as fine and as illuminating as it is, cannot speak to the entire spectrum of experience, nor should it be expected to.
Posted by Reading While White at 6:00 AM

I can't wait to get my hands on this book. I was hoping that it was something I could relate to in a topsy turvey kind of way. I'm black and not adopted, so it seems like this character and I would have nothing in common, but I also know what it feels like not to belong anywhere. I grew up predominately around people who were white, and they constantly reminded me that I was the the "whitest black girl they knew." Everything from the way I speak, to my musical interest (I was a musical theatre major and love show tunes). While with my black friends also felt the need to let me know that I "talk white". I even hear that from family members. No one is trying to be mean, but it makes you feel like you don't belong anywhere.

I'm very interested in reading this book on a personal level, as well as, as a librarian.