On Friday morning, We Need Diverse Books (WNDB) presented the inaugural Walter Dean Myers Awards for Outstanding Children’s Literature at the Library of Congress.  The Walter (as it is often called) was awarded to Jason Reynolds and Brendan Kiely for All American Boys. Two Walter Honor Books were named: Enchanted Air by Margarita Engle; and X: A Novel by Ilyasah Shabazz and Kekla Magoon.

Ellen Oh, President and CEO of WNDB, spoke briefly about the award and the gorgeous setting for the ceremony, noting, “We walk in the footsteps of giants, many of whom are in this room.” Author Jon Scieszka, the first-ever National Ambassador for Young People’s Literature, spoke about his memories of Walter Dean Myers, noting: "Walter could do the talk, if he had to, but he was really a doer." He then turned the program over to host Christopher Myers, the award namesake’s son and a multi award-winning author/illustrator himself, who spoke about the various fights involved in creating children's literature that reflects our world.  "We are fighters here, and this is where the fight happens: In an exchange of ideas," said Myers.

In her acceptance speech, Margarita Engle said, “Being misunderstood is a writer’s greatest nightmare. And to be understood is a dream.” After reading a poem from Enchanted Air, Engle spoke about the historically tense relationship between the US and Cuba, noting, “When I was a student, it was easier for a US citizen to walk on the moon than to visit Cuba... I hope [Enchanted Air] will not just speak to Latinos... but also to readers from other backgrounds who might feel like a bridge or a storm for any reason.”

Kekla Magoon shared a question that she and Ilyasah Shabazz have frequently been asked: With The Autobiography of Malcolm X being widely read, why do we need a book about the first 14 years of the Civil Rights activist’s life? As Magoon said, even when things are bad, young people have the power to make a change in their lives, a capacity that Malcolm X exemplifies. As Magoon and Shabazz were set to receive their awards, Shabazz returned to the microphone and delivered one of the day’s most powerful statements, directed at adults who work with children: “When young people are in pain, they don’t always make the best decisions. That’s what happened to my father and that’s why we need adults to see the beauty in, and invest in, our kids.”

In his acceptance, Brendan Kiely called for change, both in the world of children's literature and in the larger world.  "This is one of the most dangerously powerful aspects of privilege--the privilege to look away, to choose NOT to engage.  Just as the statistics clearly expose the injustice in the world of law enforcement, the numbers are starkly apparent in book publishing, too.  We need a more diverse workforce, a more diverse array of book reviewers and books reviewed, and a much larger pool of diverse authors getting published regularly."

Jason Reynolds added, "We need stories that appeal to the diversity inside us.  I am not a monolith."

"The most exciting thing about The Walter Awards," said Chris Myers, "is that we get to define what is is we're looking for.  It's nice to define our own standards, to have a hand in creating our own Canon." 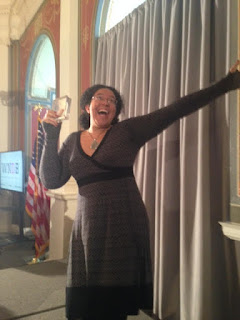 -by Sam Bloom and Allie Jane Bruce
Posted by Reading While White at 5:00 AM