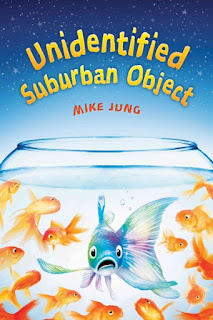 Spoiler alert.  There is no way to discuss Mike Jung’s second novel here without fully revealing the twist that the industry reviews manage to dance around.  So here we go.

Now in seventh grade, Chloe Cho is pretty fed up with the microaggressions that result from being the only Korean American (even Asian American) in her school.  To add to the annoyance of constant comparison to famous violinist Abigail Yang, and ridiculous mispronunciations of her name, her parents ever more firmly refuse to discuss anything about their life in Korea, while her best friend, Shelley, seems to go overboard in helping Chloe explore her roots.  When a new teacher, Ms. Lee, becomes the second Korean American in the school, and assigns a project to explore family history, Chloe finally succeeds in pressing her parents for their story, and it is not quite what she expected.  Her parents, it turns out, are not only not from the United States. They are not from planet Earth.

The only known survivors from Tau Ceti Four, her parents escaped destruction in an experimental spacecraft her mother was developing.  Because of their very close physical resemblance to Koreans, they tried first to settle in Korea, but quickly found they stood out there too much because they “did it all wrong, everything from speaking the language to finishing a bowl of noodles. It was very, very uncomfortable” (p. 146).  So they found safety in a place where people don’t know any better: Primrose Heights, a super-white suburb somewhere in the United States.  Chloe’s father assures her that despite “all the stupid crap” she has to listen to, the alternative is worse. To this Chloe responds, “What’s worse than being surrounded by racists all the time?” (p.148-9)

Jung is very, very funny.  It’s this humor that allows him to explore the intersections of cultural and individual identity, friendship, and being thirteen with immense clarity through an unusual conceit. It’s when the twist happens, when we enter the surreal, that the emotional narrative starts to feel more real.  It may be, in fact, that White readers have more access to empathize with Chloe through this preposterous lens, since it seems so hard for us to otherwise see racism.

A few weeks ago, the Library of Congress announced that it would stop using the term “illegal alien” in subject headings.  It is great news, but tempered by the fact that the replacement phrases are negatives: “noncitizens” and “unauthorized immigration.”   Sometimes seventh-grade humor seems to best way to expose, live with, and struggle against this kind of absurdity.  Chloe does, as she returns to school with her new knowledge about herself, on page 153:

I trudged into the building and stopped at the trophy case next to the main office. If you stand at just the right angle you can see your reflection in the glass on the side closest to the front door, and I stared at myself. Kids’ faces appeared over my shoulder, some of them looking at me curiously, then were replaced by others. None of those faces looked like mine, of course. None of them ever had. That wasn’t anything new--people were always treating me like I was from outer space, and I’d never looked like everyone else, no matter how I acted or what I wore. Were things actually all that different now?

I can imagine a myriad of reader responses to Jung’s novel, including disquiet or discomfort, but Jung seems to make a safe place to explore them through his use of fantasy or surreality or absurdity ….or whatever it is you want to call this singular story.
Posted by Reading While White at 5:00 AM

I really enjoyed this title. The twist was clever, but even before that I liked the way Jung had hChloe having to navigate her own world and determine whether she was assuming that she was being stereotyped or not. Felt so real and complex. Impressed too with Chloe's voice, Jung captures it really well. And agree --- it is quite funny in spots.

This is one I have to get my hands on; all the more so after this review.

I was not imagining the cover to look like this--interesting! It reflects the humorous tone but doesn't give anything away, including what sounds like substantial content.

I meant to add context to my comments re cover: I was also thinking about the issue of whitewashing, or in this case rendering the content invisible on the cover. I have yet to read the book but am eager to (it's in my bag!). But I wonder how much that was or wasn't a discussion or thought process for the designer, especially given that this sounds like a singular and successful look at modes of racism . This isn't a right or wrong for me in this case re the cover (at least not at this point without having read it ) , I'm just curious.

I had the exact same thought/question, Megan! I will bring it up with my 6th-graders and see what they think.
I cannot WAIT to read this...

There is something disturbing in a twist that turns a Korean girl into an alien.

Follow-up re cover: There is a discussion in the book of book covers, inviting critical thinking on this very subject! So good in many ways. (And I get the fish reference on the cover now:)

Debra, I agree it sounds disturbing on the surface (which could be a reason, in fact, for not exposing the twist on the outside or marketing matter). Have you read the book? I was very impressed at how he uses this device to further expose racism.

I agree, Nina. I thought it worked so well as a way to examine the way race is so often viewed from within White communities as about the "outsider" or "other."