She is one of the founders of the American Indian Studies program at the University of Illinois where she received the Provost’s Award for Excellence in Undergraduate Teaching in 2003.

Debbie currently serves on the  Literature Advisory Board for Reading is Fundamental and The Journal of Children’s Literature.   I appreciate Debbie making time to talk with us about her career and life.

Can you share your origin story? How did you get started in this work, and what has changed over time?

That is an interesting question! It creates an opportunity for me to address the tremendous visibility and invisibility of Native peoples. We are not “First Americans.” Our origins predate what came to be called the United States of America. Time and again, though, writers and their editors seem hell bent on doing a force-fit in their depictions of us. In a cynical moment, I’d say that was a political move, intended to undermine who we are. In the next moment, I’d say that it is indicative of ignorance or a feel-good embrace of an American society that—intentionally or not—wants to look away from the stories it tells about history.

My origin story, then, as a woman of a Native Nation is this: I’m tribally enrolled at Nambe Pueblo in northern New Mexico. In the 1600s, my ancestors fought like hell against the Spanish explorers and missionaries who sought to take our lands and eradicate our ways of being. That fight is why I’m still here and why my people are on the land we’ve been on, for hundreds of years. In fact, our kiva—which is similar to a church—has been there since the 1300s. We still use it. When we pray, we don’t pray for our personal needs. Our elders remind us that what we do is for our community and for the world. Those words are powerful and stand in stark contrast to “the American dream” which tends to be about one’s own accomplishments and acquisitions.

I know that answer is a bit long, but it is part of my origin story. What I do as a scholar in children’s literature—especially what I do at my site—is an embodiment of those teachings. Stories. Words. They matter. They shape individuals, communities, and the world, too. I started American Indians in Children’s Literature in 2006 as a way to make my work freely accessible to parents, teachers, librarians, professors… anyone who was interested in learning about the ways that Native peoples are represented—or I should say misrepresented because that happens more often—in children’s and young adult literature.

Change over time? The year 2016 marks a significant moment. Several books were withdrawn or revised, due to conversations on social media. Content area bloggers are making a difference in how writers write, how editors edit, and how reviewers review books. I’m more optimistic than I’ve ever been! I’m a realist, though, and acknowledge the power of capitalism. Money talks. What we buy matters.

And, I’ll add, that I see the current presidential administration as a threat to Native nationhood. The presidential memorandum about the Dakota Access Pipeline is deeply unsettling. Native people who went to Standing Rock went there with sovereignty foremost in their minds. They, like me, carry a different origin story than most Americans do. So much of the news media about the resistance to the pipeline focused on things like drums, tipis, and feathers but said little if anything about our status as sovereign nations. I can’t help but wonder: if the word “nation” were present in more children’s books, might that help reporters, and allies, too, understand and speak of our nationhood in ways they do not, now?


Have you seen any important trends or themes in publishing by and about First/Native Nations over the last ten years?

I’m thrilled to see a growing awareness of our sovereignty! I love, for example, that Reading While White is using it. Collectively, you hold a lot of influential power, so I’m really happy to see it here. I’m also seeing a growing awareness of what it means to be a tribal member or citizen. History being what it is, so many people claim to be “part Native” – I’m seeing more conversations about what that claim means. I know it makes people uneasy to wonder if someone is Native or, not-quite Native, or not-really Native at all. If we can shift from thinking that is a racist question, to thinking of it as a political one similar to nationhood or citizenship in, say, France, I think we’d all be in a better place. I love that Tim Tingle’s How I Became A Ghost has “Choctaw Nation” on the very first page, and I love that Cynthia Leitich Smith’s Jingle Dancer has information about the Muscogee Nation in the author’s note. This matters!

I’ve started to see Native characters that are LGBTQ. Unfortunately, most of them are stereotypical. That is frustrating. Native kids who are LGBTQ need mirrors, too, but the ones they’re getting are just like the ones Native kids have gotten for decades. Those aren’t mirrors. Those are White Man’s Indians. Literally, those images are created (for the most part) by White writers. The need is there, however, and I’m hopeful we’ll see better representations, soon.

I’ve also started to see Black Indians. Or—I should say—I’ve noticed two in particular that I didn’t notice before. This new awareness of two favorite books is important. In Jingle Dancer and in Rain Is Not My Indian Name, Cynthia Leitich Smith has two characters that are Black Indians. Now, whenever I read, I keep an eye out for that. And whenever I give a lecture, I talk about her characters. African Americans in the audience are thrilled. It speaks to the need for more of that, too. They have to be well done, though, and Smith’s are terrific. Researching these characters is on my to-do list. I’ve got to read and analyze Virginia Hamilton’s Arilla Sun Down and Michael Dorris’s The Window.

What is one question you wish more White People would ask about First/Native Nations?

“Do I know what I’m talking about? How do I know it?” If people would just hit the pause button on what they think they know, a wide range of questions open up. This is critical thinking that asks us—me, too!—to question what we’re taught, who taught it to us, why it is taught that way… In light-hearted moments, I want to say “WHO SAID” in the way kids challenge each other on the playground.

In all the work that you do, what are you most proud of?

A few years ago, Simon Ortiz asked me to give a talk in the lecture series named after him, at Arizona State University. He is from Acoma Pueblo and is amongst the most respected Native writers in the U.S. I gave my lecture in October of 2016. Now, I am in the company of women I deeply admire, like Buffy Sainte-Marie, Ofelia Zepeda, and Leslie Marmon Silko, and Wilma Mankiller. https://english.clas.asu.edu/indigenous

Oddly, I’m proud of the fact that people whisper “Debbie Reese hates white people” to each other. It means they are aware of my work. Whether they believe that I hate white people or not—they’re paying attention.

How do you stay motivated or promote self-care when facing frustration or pushback?

Around me, I have photographs of my daughter as a little girl, her cousins, my siblings grandchildren. In lectures I’ve been sharing this photo. That’s my little sister’s granddaughter. Her joy is infectious. I want to see that joy on her face every time she picks up a book with Native content. 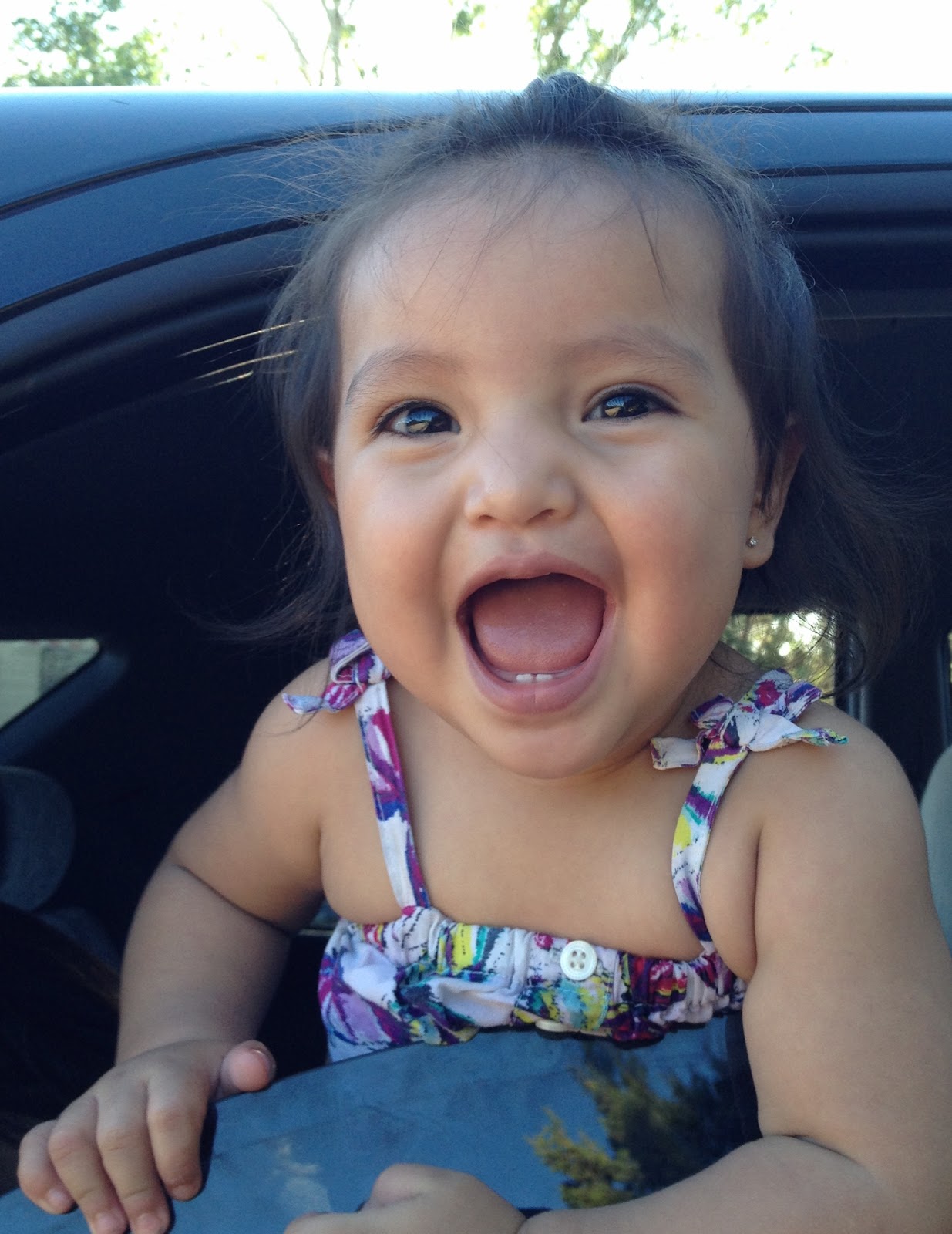 Who are your heroes, both within and without the children’s literature world?

Last week on Twitter, I posted a series of photos of Native women I’m inspired by. This was part of the women’s march to Washington DC. I’ll share their names here.

Suzan Harjo, for her activism and bringing the National Museum of the American Indian from an idea to a stunning reality, there on the National Mall in DC.
Joy Harjo, for her poetry, her music, her stories.
Lotsee Patterson, for working to get Native people into library science.
Cynthia Leitich Smith, for her mentorship of writers, and her own books, too.
Elizabeth Reese (my daughter) and other young Native women like her who have a fierce commitment to standing up for our Nations.

What advice do you have for others looking to do equity work in the world of libraries and youth literature?


Network! Find others who are doing similar work. Being able to reach out to them is crucial. This is hard work. They will sustain you. I could name some of the people I turn to, but I’ll use RWW’s social media platform to direct your readers to another one! Go onto Twitter and search using #DiversityJedi. We started using that hashtag--created by Cynthia Leitich Smith--on November 2, 2015. Two of the DiversityJedi were in this RWW series of interviews! Laura Jimenez and Edi Campbell are people I learn from, and turn to, as well.

-Ernie Cox
Posted by Reading While White at 5:00 AM

Email ThisBlogThis!Share to TwitterShare to FacebookShare to Pinterest
Labels: Interviews

The idea that Dr. Reese is still searching and finding ways to include and expand our ideas of what Native people look and act like (Black and LGBTQ Native people) is heartening. We need to strive, as she says, to push that pause button. Trying to teach and reach people is hard work ... thank you.
Laura Jimenez
Fellow #diversityjedi

“Do I know what I’m talking about? How do I know it?” -- Great advice overall.