Reviewing While White: The Nameless City by Faith Erin Hicks 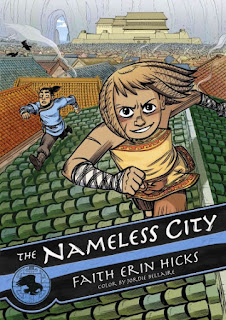 The Nameless City is the first in a series.  The main plot revolves around two characters, Rat and Kaidu, who become best friends even though they are from different worlds.  In Hicks’s universe, “different worlds” pretty much breaks down to “conquerors” and “conquered.”  The main action takes place in the titular “Nameless City” - a city, valuable for trade due to its location at the opening of a river passage, that has been the subject of repeated cycles of conquest over generations.  Kaidu is a member of the Dao people, the current occupiers of the city.  Rat is a member of the group known only as “The Named,” i.e. the residents of the city, presumably made up of “generations” of residents who have survived the cycles of occupation. I say presumably because one of the main weaknesses of The Nameless City is not taking the impact of generations of conquest as serious as is warranted.  Who makes up “The Named” and when does a city resident become considered as such?  Are “The Named” composed of any disenfranchised citizens no matter who is conquering the city or can you become part of “The Named” when a new conquering group arrives? If Kaidu’s Dao people were conquered and replaced as leaders would the Dao then belong to “The Named”? Hicks never specifies any of this or sorts it out in any coherent way and that’s a real problem in a story that is ostensibly about the importance of different cultures and people coming together to build a coalition: how can we appreciate that if we can’t really tell them apart in the first place?


The idea that some people, and some places, are “nameless” is a common, and troubling, White stereotype.  It allows White people to other and exoticize people of color. Hicks never uses “tribes” to describe the people who have lived in/conquered the city. This is just one of the problems with how the book avoids specificity of culture and location.  Various groups are referred to as “the horse people,” “the people of the river,” and “the warrior people.” The first people who lived there, whose language and science has been lost, are referred to as either “The Northern People” or the “The First Builders.” But we also get a few specific names such as Dao, Yisun, and Liao. Do those names sound “Asian inspired” to you?  They did to me and that ties into the key problem of The Nameless City.


I say “Asian inspired” for a number of reasons, one being the fact that Hicks herself has openly talked about how she drew inspiration for the story. Here’s an interview with her at Comics Alliance:

CA: You say it’s loosely based on feudal China?
FEH: Well, the setting is based on that particular time period, but there’s no historical link between the story that I’m telling and and events that happened in that period. I just used it as the inspiration for my story’s setting.
CA: If you weren’t worried about historical accuracy, did you still spend time researching?  And did you limit your research to that period, or did you pull in some elements of other things?
FEH: I did a little bit of research on later periods, but most of it was specifically influenced by the Mongol dynasty that oversaw China during the thirteenth century.

There are some really troubling statements here and I think those attitudes show up in the text. Writers, especially White writers, should not just cherry pick the aspects of a culture and history that they want for the look and atmosphere of a story while leaving out anything that they don’t know enough about or don’t feel engaged by.  That's a textbook definition of appropriation and it's endemic in works by White people.  Just because White writers choose to make up cultures, tribes, and even races doesn’t mean they then somehow exist in a world where real life biases are harmless.


Along with the names, the “Asian inspired” elements show up everywhere in this work and it is clearly intentional. There are Chinese junk ships, Chinese style clothing and fighting, and the repeated use of Asian inspired names as mentioned above. There’s even street signs that have “Chinese-like” writing that isn’t actually a real language. What elements did Hicks use as "inspiration" and what did she leave out?  WHY?  What do those omissions tell us? The Nameless City  has received overwhelmingly positive reviews. Kirkus and Booklist both starred it, Kirkus named it to their Best Fiction of 2016 list. But let’s take a closer look at the reviews. The Publishers Weekly  review says it has "a Tibetan air" while the Kirkus review says it is "Asian-influenced" ... these things aren't interchangeable. Booklist seems more aware of Hicks’s process and says the setting “resembles thirteenth-century China.”
Resembles? Influenced? Air? These are weak words for the fact this book takes place in a world that samples from Chinese history on a surface level only when it suits the author. Asia doesn’t mean only China.  Tibet and China are not interchangeable. These cultures and places deserve more than being used as set decoration or “trendy” influences for stories. The fact that reviews are just lumping it in with hand-wavey "you know, like, over there?" is indicative of the problem. Asia is not a mono-culture and removing details, appropriating only what you want, perpetuates the kind of thinking that now, more than ever, kidlit/YA should be tearing down.


At one point in The Nameless City (pg. 89), Kaidu’s father (part of the Dao, the group currently occupying the city) tells him, “For thirty years the Dao have brought peace and prosperity to the Nameless City.” Hicks makes a great choice: to illustrate this scene with Kaidu receiving this pronouncement from his father while sitting in front of a painting showing Dao warriors in battle - specifically while they are slaughtering people. It’s a bracing contrast, one left for the reader to wrestle with, and the kind of brutal introspection this text needs more of. In another scene towards the end, a monk from the Named describes the Dao’s battle as a “sneak attack.”  Kaidu repeats back the story he knows: “It wasn’t a ‘sneak attack’! It was a heroic battle.” The monk answers, “So the Dao say. The Yisun might think differently” (194). Again, these are the kind of conversations about conquest and ruling that this book should be engaging with, but too often Hicks chooses to smooth over the consequences of colonization and conquest by falling back on half-explored themes of how perhaps we’re more alike than different. This is all further complicated by the opaqueness regarding an actual, specific setting and culture.


There are certainly some strong elements in the The Nameless City.  But overall this is a title I can’t recommend. Cultures aren’t interchangeable. Names matter, even in supposedly Nameless Cities.


--
Further Reading: Laura Jimenez’s takes a critical look at Nameless City, including how it fails the Bechdel Test.


Let me stress that one of the most important things you can do to boost the voices of artists of color is to support their work financially. So if you love indie comics by creators of color, I urge you to check out and support Wendy’s Patreon and Trungles’s Patreon. I love getting their drawings and updates!
Posted by Reading While White at 5:00 AM

Terrific analysis! Posts like this help me a lot.

I learn from you, Angie, and others at RWW, by reading your reviews.

And they do good for my soul, too. We need lots and lots of people to read critically, as you do, and share these critiques. That is how we'll get to a better place.

I've been mulling over commenting on this review for a few days and I'm still not sure what to think about it. I understand the analysis, and I generally agree with the points it makes on a personal level. And in some ways I suppose it could be called a critical analysis. However it's really just an opinion piece, when you break it down. Just saying "Names matter" multiple times unfortunately doesn't make it true. Or untrue. It's simply unproven.

What concerns me is that there is a lot of repeating of the same information on this blog with not much data to back any of this up. Maybe that's not the point of RWW, but including some studies, citations, would allow me to better use the really valuable information shared here in my own research. And I think it could broaden its impact considerably. Thanks for allowing me to comment.

Thank you for writing a piece with such thoughtfulness and compassion!

That said, I'm an Asian-American woman and I have absolutely no problem with white people borrowing from Asian symbolism or finding "inspiration" in Asian cultures in vague and generalized ways. dAnd I'm also a little perplexed as to why, in a fantasy novel, the author should be duty-bound to ground details in historically accurate parallels. That sort of defeats the purpose of a fantasy, no?

I think that a fair degree of your analysis may be rooted in a framework of Western imperialism/dominance that's growing increasingly irrelevant in the face of rapid globalization. Many Asian nations are currently world powers, with their own heft, influence, and force. They often borrow from Western narratives and use Western symbols in their storytelling, and you'd be hard pressed to find someone who'd call it problematic, racist, or anything else. Because, really, there's not much of a power-differential these days.

I'm curious to understand what you think the harm is in the practice you've highlighted here. If any other AA peeps are reading this, I'd love to hear your opinions, too! I think in general, Asian-American people are much, much more tolerant of "cultural appropriation" than are our allies on our behalf.

I appreciate you raising issues about cultural appropriation, which are critically important. However, I feel you have distorted key aspects of Faith Erin Hicks' work in The Nameless City. She has not labeled this city as "nameless" in a trivial or thoughtless way; instead, her narrative very intentionally addresses the relationship between the power of colonial rulers and the power to control the use of language to name and define who is human. This is not cultural appropriation. If anything, we need more stories like this, especially ones that are written in age-appropriate ways for young readers.

In spite of your good intentions, your critique feels like a stretch to me, as if you are desperate to prove what a culturally competent white reviewer you are. In the process, you have missed and distorted some of the key strengths in Faith Erin Hicks' wonderful story. I strongly disagree with your review, and I think it would be unfortunate if anyone missed out on the first installment of this series because of your misleading comments.

Hmm, where to start with this blog. You are so obviously deciding that everything must be *problematic* according to a simplistic set of criteria before you've even read it, and your reviews just read as false and forced. It's not critique at all, it's by-the-numbers ideological propaganda. (from a PoC who finds this kind of thing desperate and tryhard and kind of creepy)