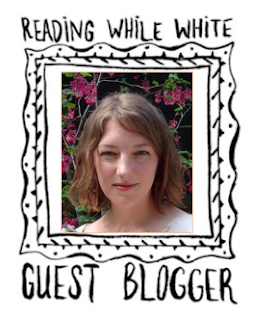 Today we welcome Guest Blogger Sarah Jo Zaharako in our second of three posts spotlighting the “Fighting for Justice” series from Heyday Books. The first post was a review of Fred Korematsu Speaks Up.

In 1866, Biddy Mason bought a parcel of land on the outskirts of Los Angeles. The purchase provided a legacy for her family and helped Mason become one of the wealthiest people in Los Angeles. She was 48 years old, a midwife and herbalist; a single mother; a formerly enslaved person and a survivor of rape. Mason helped shape the Black community in Los Angeles through philanthropy and community organization. Her story, like so many millions of untold stories, fills a gaping hole in how the American historical narrative is transmitted to young people. 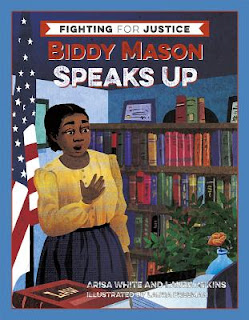 Through a smorgasbord of documentation, White and Atkins demonstrate the depth of evidence needed to fully understand the impact of slavery and racism both in a historical context and in modern day society. Painful and violent concepts like enslavement, profiteering, and rape are respectfully approached with age-appropriate clarity, which will prompt meaningful discussion.

Chapter three provides an honest look at slavery and genealogy, a topic integral to Mason’s story. The inset explains that slavery was matrilineal, meaning that if a mother was enslaved, her child was enslaved. “Enslaved women could sometimes partner and have children with enslaved men. Masters could also rape enslaved women. Enslaved people did not have a choice about how their bodies were used, since they were seen as property” (p. 21). A supplemental text box defines rape as “When one person forces a sexual act on another person who does not want it or who is unable to give consent” (p. 21). Direct explanations like these encourage questions and link the atrocities of the past with current campaigns for equality and justice. The Fighting for Justice books explain to children why things aren’t fair. They also uplift and empower, proving through their protagonists that ordinary people can speak up.

Among many defining attributes, the Fighting for Justice series (Fred Korematsu Speaks Up, 2017) forges a connection between history and present day society. Biddy Mason Speaks Up invites readers to confront White supremacy, and to explore equality and injustice together in a meaningful way. A supplemental section titled “Healing Your Community: From Biddy’s Day to Ours” explores modern day activists and organizations including Black Lives Matter. Here, an inset introduces the work of modern-day abolitionist Regina Evans and describes the prevalent but not widely recognized practice of human trafficking. This reference demolishes the idea that slavery is neatly contained in a single ugly chapter of American history.

Throughout the book, readers are encouraged to apply the concepts in each chapter to their own experience through thoughtful prompts like, “What are the barriers that keep you from speaking up?” Such questions promote reflection, a critical practice for mindful readers and thinkers.  When learning is personal, so is it memorable.

The focus on Biddy Mason as the protagonist further sets the book apart from the myriad historical texts for middle-grade readers. Publishers have traditionally delegated the portrayal of slavery in America to a relatively small cast of historical figures like Harriet Tubman and Frederick Douglass. In doing so, slavery’s repercussions are given limited scope in the literary world. Mason’s story suggests that she is but one of millions whose experience has been omitted, if not erased, from the American narrative. I found myself asking the question, “Why have I not heard this story?” and contemplating how many more stories I have been denied by a traditional American education.

Biddy Mason Speaks Up invites young readers to join a conversation, to reflect, and to make connections. It is powerful in its intimacy and memorable for its honesty. Most of all, the book empowers. The Fighting for Justice series lays a foundation of knowledge and provides the questions that will fuel the change makers of tomorrow. Biddy Mason is intriguing, direct, and impossible to put down.

Guest Reviewer Sarah Jo Zaharako works with children in public and school libraries in the San Francisco Bay Area. She is a musician and mother and will soon complete her MLIS at San Jose State University.
Posted by Nina Lindsay at 5:00 AM

Thanks for this review and insights.