Spotlight on #OwnVoices: Not Your Sidekick 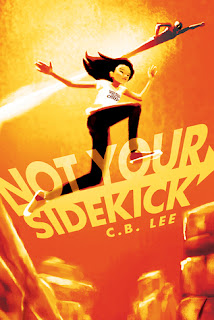 There is so much to love about C.B. Lee’s 22nd-century superhero story, starting with its protagonist, Jess Tran. Jess is a Chinese-Vietnamese American teen living in a world that is both startlingly different and very much the same as ours. Geopolitical realignment after the third world war, which followed the 21st-century Disasters, led to the formation of collectives across the globe. Jess’s parents emigrated from the Southeast Asian Collective to the North American Collective, and Jess has grown up in the small city of Andover, Nevada region.

On a daily basis, Jess goes to classes, hangs out with best friends Emma and Bell, and has a fascination with old tech, especially DVDs. She is openly bisexual, and no one thinks twice about it. Along with gender identity, it is a matter-of-fact aspect of the story; part of the background, not a dimension of the plot.

But in this future, some humans have inherited meta-abilities, superpowers that were originally activated during the Disasters due to the release of X29. Jess has a fangirl crush on Captain Orion, commander of the Heroes League of Superheroes and granddaughter of one of the original meta-humans. The Heroes League and North American Collective run a meta-human training program, and many communities have their own superheroes in place to battle the super-villains that also reside there.  Outside of Jess’s family, no one in Andover knows that Jess’s parents, mild-mannered real estate agents Lia Hua and Victor Tran, are C-class superheroes Smasher and Shockwave, keeping the community safe from villains Master and Mistress Mischief.

Meta-human abilities are genetic, and manifest by age 17. Jess is about to turn 17, and it’s clear she hasn’t inherited any. It’s yet another way Jess’s older sister, Claudia, who has already been labeled B-class, outshines her.

Trying to forge her own path, Jess pursues an internship at Monroe Industries, a robotics company. To her surprise, she gets it. Even more surprising, her longtime secret high school crush, Abby Jones, is another one of the interns. Most surprising of all, Jess learns that the people behind Monroe Industries are none other than Master and Mistress Mischief.  The Mischiefs are away, however, and another intern, M, is standing in, wearing the Mischief suit in order, M explains, to maintain authority.

Jess says nothing at home about the Mischiefs. After all, they are more pranksters than villains, and Jess admires some of what they’ve done. (At least one of their pranks saved the public from eating contaminated cheese.) And even though Jess doesn’t know who M really is, they develop a friendship. Jess even finds herself confessing her crush on Abby to M, which M encourages her to pursue.

SLIGHT SPOILER: It won’t be a huge surprise to most readers that Abby is actually M, and that their attraction is clearly mutual. Abby also reveals that her parents are the Mischiefs. Jess in turn confesses that she is the daughter of Smasher and Shockwave. Neither truth gets in the way of romance. Of greater concern, however, is that the Mischiefs are missing, and have been for awhile, and Abby thinks Captain Orion is behind it and the disappearance of other villains. She asks Jess to help her prove it.

It’s not the first time in her life Jess has felt torn between two things. In a community with a large Asian population, Jess feels comfortable, yet although she can understand both Chinese and Vietnamese she’s not fluent in either, and sometimes feels she’s not quite “enough” of either culture. But this is different. This is someone she trusts—and loves—asking her to question someone and something she’s always believed in: Captain Orion and the Heroes League.

There are surprises in store as the novel builds to it’s action-packed climax, including the sobering revelation that racism has not disappeared in the 22nd century.  Like many superhero outings, this one delivers social commentary in the context of a novel in which pacing, plotting, and characters make for an effortlessly enjoyable work. Jess, Abby, Emma, Bell and other characters are both genuine for our time and fit seamlessly into this imagined future that middle grade and young adult readers can all enjoy.