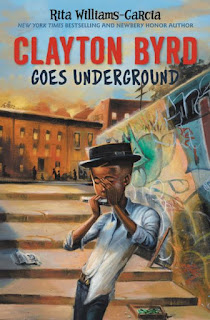 Clayton Byrd is cut from the same cloth as his grandfather, Cool Papa Byrd. Both of them live for the blues, a love Clayton’s mother (Cool Papa’s daughter) cannot understand. When Cool Papa Byrd suddenly dies, Clayton, determined to run away and join the Bluesmen (Cool Papa’s band), begins a journey that takes him deep into the New York subway system and into a tenuous alliance with a beatbox crew.

It just about goes without saying that this latest offering from Rita Williams-Garcia is packed with vivid descriptions and language so poetic it may as well be music, but my favorite aspect of this book was the strength of Cool Papa Byrd’s character and presence, even though he dies less than twenty pages in. The potency of the (borderline-unhealthy) love Clayton feels for him is palpable, as is his grief when Cool Papa dies; but Ms. Byrd’s feelings towards him are far more negative, as evidenced by her need to sell every one of his possessions after he dies. This book could be foundational for a curriculum on unreliable narrators, as the voice occasionally switches from Clayton ’s perspective into Ms. Byrd’s point of view, such as when she recalls childhood memories of wishing, fruitlessly, for Cool Papa to “drop anchor at their house and take her to baseball games.”

Caregivers and teachers could also use Clayton Byrd Goes Underground to delve deep into the idea of practicing compassion for those who see the world differently than we do. For both Clayton and his mother, the blues are inextricably linked to Cool Papa Byrd; but for Clayton, this connection manifests as he adores, fears, and idolizes his grandfather, while for Ms. Byrd, it translates to bitter resentment and anger as she identifies her father’s love of the blues as a force that made him “light on the fathering side.” The ways they grieve for Cool Papa Byrd are in conflict; Clayton clings to every bit of him that he possibly can, to the point of running away from home, while Ms. Byrd feels compelled to cleanse every reminder of his existence from her life.   If young readers can understand that both of these behaviors stem from an unhealthy form of grief for a larger-than-life character, and that ultimately, Clayton and his mother have to accept not only Cool Papa’s death but also the different impacts he continues to have on both of their lives, they will be well-positioned for a more understanding and compassionate existence. I highly recommend Clayton Byrd Goes Underground, especially for classrooms and family read-alouds.

Reviewed by Allie Jane Bruce
Posted by Reading While White at 5:00 AM

And now this unique, beautiful book is long-listed for the National Book Award!

Such a wonderful book!