Spotlight on #OwnVoices: Step Up to the Plate, Maria Singh 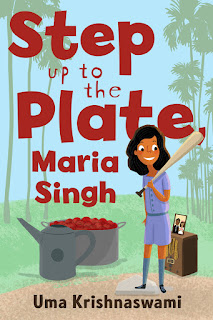 During the first part of the 20th century, immigrants from India were not allowed to become citizens of the United States (the law changed in 1946).  Restrictions on immigration also meant many Indian men came alone to the California area, and a number of them, especially from the Punjabi region, married Mexican or Mexican American women. These were farming families, and many of them leased land because the law prohibited them from owning it outright.

These historical details, explained in an author’s note as well as woven into the narrative, inform important elements of Step Up to the Plate, Maria Singh.  But at the center of the story is a small-town girl in California who just wants to play ball. Softball, that is.

It’s the spring of 1945 when one of Maria Singh’s teachers announces she’s going to form a girls’ softball team. Maria worries Papi, who is more old-fashioned than her mother, won’t let her play. When he does agree, she decides to hold off on lobbying to wear shorts: she’ll save that battle for another day.

Maria and the other girls face chiding from the boys but they keep practicing and slowly become a team under Miss Newman’s guidance. Maria’s rival on the team is Elizabeth Becker, a White girl whose father owns the land Maria’s papi farms. Mr. Becker, clearly upset by the growing diversity in their small town where a number of “Mexican-Hindu”* families, as they’re called, have settled, decides to sell his land and move. Maria’s papi wants to buy the land. But because he is an immigrant from India, he can't. (*A misnomer, Maria notes, since most of the fathers are either Sikh, like her Papi, or Muslim.)

There’s a lot packed into this novel: racism, sexism, politics, including the struggle for Indian independence from Britain (Maria’s papi and the other Indian fathers follow the news from their homeland closely), as well as the inevitable loss experienced by a community and individual families during wartime (including among the families with immigrant fathers). Maria’s Mexican American mother and her family have been in the United States for generations; her father’s present and future are here but a piece of his heart is also with the fate of India.

All of these things matter in the bigger world of ideas and action and social justice, of course, but here they matter first and foremost because Maria cares about her family and community. All of these things impact her. At the same time, none of them change the fact that she is still a girl who wants to play ball, and author Uma Krishnaswami weaves them artfully through the story of Maria and her team.

Step Up to the Plate Maria Singh is not as blithe as Krishnaswami’s middle grade novels The Grand Plan to Fix Everything and The Problem with Being Slightly Heroic, nor is it meant to be. Like Book Uncle and Me, her terrific 2016 novel that is an homage to the love of reading and also a joyful look at political activism, it offers honesty and optimism both.