Inspired by the song “Cielito lindo” and dedicated to Apolinar Navarrete Diaz, the author’s mariachi musician abuelo, this picture book captures the lyricism of love, life, and family. 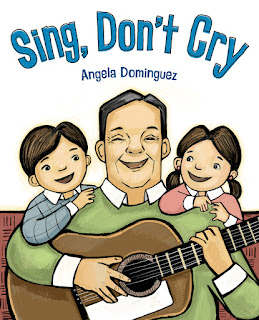 Endpapers open to blue-hued photographs arranged in a scrapbook style, with musical notes surrounding them. One caption reads “Me looking up fondly at Abuelo in Dallas, TX, 1984,” and it sets the scene—communicating to readers that what follows is rooted in reality and personal to the author. The title page shows a young girl (presumably Dominguez) and a boy (her brother) cradling a guitar. On the next page, the guitar is swapped for a guitar-holding man (their abuelo). This family clearly loves music and each other.
The text explains how Abuelo visited from Mexico (with his guitar) once a year, and how he would tell his grandchildren about his life and sing to them every night: “...if we were sad about something, he would say, 'Sing, don’t cry.' 'Because singing gladdens the heart.'"

The illustrations are colored and shaded in a way that gives each figure texture, resulting in an overall feeling of coziness. Some spreads are full of white space whereas other illustrations fill the page. Dominguez zooms in on Abuelo’s hands while he strums his guitar, and shows his back while readers see his grandkids looking up at him admiringly. These varying perspectives pull readers in and bring memories and other sensory details to life.

Parallels between the kids and their abuelo are drawn, including that each generation had to “travel a long way to find a new home.” Abuelo assures, “Some things may be lost forever, it’s true. But maybe that makes room for new and wonderful things to be found.” Through panels (each box is color-coded to match each character’s outfit), Dominguez draws parallels between each character, the losses they’ve endured, and how something hopeful sprouted up as a result of each challenge. (Abuelo lost his leg as a child, and he found music; the girl lost a stuffed animal, and she found a puppy; her brother didn’t make it with the football in-crowd, but he found a new friend and sport with soccer.)

The book's main text ends with, “'When you are misunderstood, and when people are unkind, remember—sing, don’t cry, even if it is only in your soul.' 'And always,' Abuelo told us, 'I will be singing with you.'” Dominguez concludes with an author’s note, explaining more about her abuelo’s history and optimism, and how “I carry that optimism and song in my heart.” With carefully chosen text, tenderhearted illustrations, and perfectly paced page turns, this book has a warm, melodious rhythm of its own. Don’t miss it.

Reviewed by Elisa Gall
Posted by Reading While White at 5:00 AM