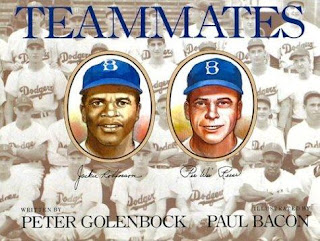 When I was in fifth grade, my teacher assigned us an essay on our hero (original, I know).  I was in the middle of a major Jackie Robinson phase.  I loved the whole “courage not to fight back” mantra, the way he played (have you seen him steal home?), and especially, the book Teammates written by Peter Golenbock and illustrated by Paul Bacon.  So when I heard about the assignment, I knew immediately who I would write about.

I came home and told my mom about the assignment.  “Who do you think you’ll write about?” she asked.  Herman “Pee Wee” Reese, I said.  The guy who, by putting his arm around Jackie Robinson’s shoulders in full view of a crowded stadium, hushed the bigoted spectators and bought Robinson a bit of a respite from the hate and vitriol regularly hurled at him.

“No, you won’t,” my mom said decisively.  I was surprised, since like me, she was a big Robinson, Reese, and Teammates fan.  Also, she rarely interfered in my schoolwork.

I was stunned.  I’d never thought of it that way, but it was true--I took a hard look at what Jackie Robinson endured and accomplished: Broke the color line in baseball nearly two decades before Freedom Summer.  Became the first pro athlete to have his number retired.  Posthumously awarded the Congressional Gold Medal and Presidential Medal of Freedom.  Helped found a Black-owned and -operated bank based in Harlem.  Marched with Martin Luther King Jr. at the March on Washington.  Stole 197 bases.  Retired with a .409 on-base percentage and a stellar fielding record.  And then I took a hard look at what Reese did:  Refused to sign a petition, circulated by his fellow players, to prevent Robinson from joining the team; and, put his arm around Robinson’s shoulders, essentially telling a hateful crowd to shut up.  Although Reese was certainly admirable, Robinson was undoubtedly heroic.

And then I was forced to self-examine.  Why had I, despite being so thoroughly obsessed with Robinson, defaulted to Reese as my hero?  And what did that say about me?  11-year-old-me didn’t have the language or tools to grapple with this, but I had a vague sense that it was something very ugly within me, a predilection for White saviorism and a willingness to elevate White people over Black people even within the Civil Rights movement, thereby co-opting that movement.  For years after this incident, I connected this vaguely negative, un-articulable feeling to the book that had spurred it.  I put Teammates aside for a long time.

Roughly fifteen years later, I revisited it in the midst of a long process of re-educating myself about race and racism, and Teammates is now once again a favorite of mine.  I’ve been thinking about it non-stop over the past week, in light of the protests of police brutality and institutional racism launched by Colin Kaepernick and the resulting national conversation.  I feel certain that some of the commentators demanding that the NFL “keep politics out of sports” would benefit from reading Teammates, which reveals the truth that politics is already, and always has been, in sports.  And, I always encourage educators to be thoughtful and deliberate in how they read and teach Teammates to children.

In Teammates, straightforward and accessible text pair with a combination of black-and-white photographs and painterly watercolors to tell the story of the Robinson/Reese friendship.  Segregation, the Negro Leagues, the KKK--Golenbock uses just the right level of detail to skillfully set the historical context, yet this is no “single story” of Black pain.  Even as the injustices of segregation are listed, the Negro Leagues are introduced as “two wonderful baseball leagues”.

I wish Golenbock had devoted similar space to the more positive and uplifting aspects of Robinson’s character and backstory; the list of indignities to which he was regularly exposed, from fellow Dodgers (I will not call them “teammates”) refusing to eat with him to pitchers aiming at his head, is gut-wrenching, as is the palpable tension and discomfort in Robinson’s face and body language in the team picture that appears in the book.  It would have been nice to balance these painful elements with positive stories of Robinson’s incredible sports feats, home life, and family.


﻿﻿﻿
Details of Reese’s life are similarly sparse in Teammates.  We get the highlights: he grew up in the thick of segregated Louisville, KY; the Cincinnati spectators hurling hate and bigotry at Jackie Robinson could have been his neighbors.  Reese must have had a strong moral compass to fly in the face of his upbringing and most of the Dodgers by forming a friendship with Robinson, and a strong backbone to demonstrate that friendship publicly, but Teammates manifests the arm-around-the-shoulders moment a little too simplistically.  I could see these final pages becoming fodder for a White Savior narrative in the hands of an irresponsible educator or caregiver.  I could also see it becoming a highly useful tool for teaching about advocacy and taking risks to stand up against bullies and oppressors in the hands of a skilled teacher.  As is true for so many books, its substance depends on its delivery.

As a White adult learning about anti-racism, returning to once again study Pee Wee Reese’s story was invaluable for me.  Segregation and other forms of racial oppression would have been part of the landscape during Reese’s childhood.  The buzzwords and acronyms so dear to me would not have been part of his vocabulary.  When he refused to sign a racist, anti-Robinson petition circulated by other Dodgers, he famously said, “I don’t care if this man is black, blue, or striped--he can play and he can help us win.”  I steer clear of language like this, and encourage others to do the same, since it trivializes very real injustices and promotes a colorblind view of the world that is only available to racially privileged White people.

And yet, Pee Wee Reese is a strong role model for White people like me.  When Jackie Robinson signed with the Dodgers, everyone expected him to take Reese’s position: shortstop.  Reese was the only player who actually stood to lose something from Robinson’s presence, and yet, he was the one who refused to sign the petition attempting to keep Robinson off the team.  When asked about this, Reese simply answered that he’d thought, “If he’s good enough to take my job, he deserves it.”

Ultimately, Robinson started as first baseman, and then moved to second, while Reese stayed at shortstop.  I don’t know this history thoroughly enough to know why Robinson was never made shortstop; given his stellar fielding, it would have made sense for him to play his natural position, and keeping him at second base may well have been an injustice against him.  It seems, though, that it was not Reese’s decision; he was perfectly willing to cede the coveted shortstop spot.  And his refusal to sign the petition took much of the wind out of its sails.

These are acts of White allyship (NOT saviorism) from which I can learn.  It’s easy to learn the jargon and concepts of anti-racism.  The true test comes when I am asked to give up something real, something material, perhaps something related to money or physical safety.  I can attend every anti-racist training, read every book, and know every buzzword--at the end of the day, what matters is whether, like Pee Wee Reese, I lead with compassion and a willingness to make real sacrifices.

This is the angle I would highlight, were I to read Teammates to kids (I haven’t yet, but am planning to this year). Don’t get me wrong; the arm-around-the-shoulders thing is important.  It takes real courage to stand up to bullies and say “You are wrong, and I am standing with the person you are targeting;” and, one can easily slip into grandstanding with actions like these.  I don’t believe Reese was grandstanding; from what I’ve read, he made a habit of openly and publicly chatting with Robinson at the beginning of games, particularly those with especially vitriolic spectators, with the deliberate intent of getting the hate-filled crowds to back off.  Robinson talked openly about how much he appreciated these actions.  But, I do think that it’s easy to slip into public displays of allyship (i.e., grandstanding) that draw attention away from the systemic changes needed to make real progress.  So, while I would support children who are inspired by the arm-around-the-shoulder narrative, I’d encourage them to focus more on Reese’s willingness to sacrifice the shortstop position and his refusal to sign the petition.

And, of course, I’d make sure to backend it with Stealing Home by Robert Burleigh and Promises To Keep by Sharon Robinson and maybe a documentary or even a screening of 42.  I’d make sure that kids understand the difference between advocacy and heroism.  (And that Jackie Robinson stole home 19 times.)

And I’d make sure that White kids know that while Jackie Robinson is the hero in this story, I deeply respect and admire Reese.  It is hard to provide positive examples of anti-racist White people to children.  Too often, we White adults provide negative examples--what not to be--or else slide into stories of the Great White Hope.  Teammates, when read thoughtfully, can be a powerful story of a role model, an example for White kids to live into rather than avoid.  I’d like to think that it was this need for a positive example that led eleven-year-old me to latch onto Teammates; in reality, I think I just liked the White savior story I’d internalized.  But with some deep conversation and thoughtful reading, maybe I could have understood the nuances in Teammates a little better.  And then, I could perhaps have understood that while I can never be a hero like Robinson, I can strive every day to be a teammate like Reese.

-Allie Jane Bruce
Posted by Reading While White at 5:00 AM

Teammates is a book used by the New Hampshire Humanities Council in its Connections program which is a literacy enhancement in a number of settings -- correctional institutions, adult classes of people with developmental disabilities and, most often, English Language Learning classes with new americans. I have taught it several times with participants from a wide range of countries of origin (needing to explain the rules of baseball which is actually a very useful thing in a culture where people are expected to absorb this sport at age 3). This is a hugely helpful article. Thank you so much.

Very thoughtful analysis of the book and of your response. Thanks so much.