Spotlight on #OwnVoices: The Stars Beneath Our Feet 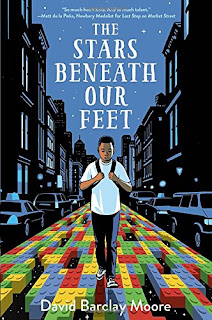 Lolly is still getting use to the gaping hole left in his life by the death of his older brother, Jermaine. He not only misses Jermaine, he feels guilty because they weren’t speaking at the time Jermaine was shot and killed.

Lolly is also keenly aware that, at 12, he can no longer move freely through his Harlem neighborhood as he once did. He’s now old enough for territories to matter as crews of older boys and young men eye boys like him and his best friend, Vega, looking for their allegiance or to label them as trespassers.

Two surprises gifts as Christmas approaches illuminate both possibility and disconnect for Lolly. A neighbor and childhood friend of Jermaine’s gives him a book about New York City architecture. It’s out of the blue: Lolly has never expressed interest in architecture. But he does love building with Lego and has amassed a collection of kits he's assembled following the exacting specifications of their various instructions. The book inspires Lolly to tear them all apart and start over, the only guide his imagination. And he imagines a lot--not just buildings, but a story to go with them.

In the meantime, one of Jermaine’s recent friends, a guy Lolly knows it’s best to avoid, stops Lolly on the street with a gift, one he says Jermaine wanted Lolly to have.  It’s a gaming system. But Lolly doesn’t like playing video games. He’s never really liked playing video games. The gift is a symbol of how little his brother, once Lolly’s idol and protector, had grown away from Lolly and also, Lolly realizes, from the person he once was. In fact, the reason Jermaine wasn’t speaking to Lolly at the time of his death was because Lolly refused to start working with him, even though Lolly was fulfilling the promise Jermaine himself had extracted long before, back when he looked out for Lolly: Never do what I do.

Offering hope, acknowledging hardship. Debut author David Barclay Moore writes with open eyes about the challenges of Lolly’s life as a Black boy in a poor neighborhood on the cusp of young adulthood, and with eyes just as wide he shows the many things Lolly has going for him: his terrific mom and her wonderful girlfriend; his dad, who may not be around every day but is a constant regardless; the community center director; the neighbor who gave him the book; his best friend Vega; the list goes on. Lolly’s creativity, too, is a force he can harness.

Lolly also makes a new friend in Rose, a girl who faces challenges of her own, When Rose first starts building with Lego next to Lolly, he’s resentful of the invasion of what he considered his own private space. Then he sees her work as competition. Slowly he starts to respect what she’s accomplishing. He begins to see beyond her nickname (“Big Rose”) and reputation (as a bully) and silence to the particular girl, one with whom it turns out he has common interests. It’s never clear whether Rose’s sometimes difficult personality is rooted solely in external influences (she saw her mother killed), innate, or a combination of the two. It doesn’t matter to their friendship, and I admired the way Moore lets this relationship change and grow over time, never rushing it.

It’s the characterizations that made The Stars Beneath Our Feet truly shine for me, revealed through masterful dialogue and authentic interactions among people in Lolly’s family and community on every page, in almost every scene. I both laughed and cringed at the realistic way the kids at Lolly’s afterschool program talk to one another, sometimes skirting the edge of meanness with their takedowns, sometimes crossing over; just as believable was the way they offer true and generous admiration for what Lolly and Rose accomplish when they build.

I didn’t always find the plot as tight as the characterizations are wonderful, but even when I felt it loosened, the heart of the story maintained a powerful gravitational pull. When Lolly’s best friend Vega, hovering on the edge of something dangerous, makes a decision that comes down firmly on the side of hope with Lolly by his side, it’s a moment that underscores everything Moore has revealed so beautifully: the importance of friendship and family and community and creativity on children’s ability to see beyond the hardship of their lives to the possibility of them. He isn’t suggesting it’s easy. He is making clear it’s essential: without hope, there is no choice or agency.

This was amazing you are really good at writing

This is my daughter's book of the week....so far so good!