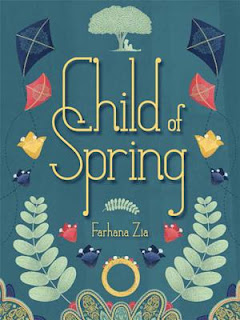 This lovely little book follows Basanta, a young girl living in a village in modern day India.  Basanta works with her mother in the big house, often working for the rich girl of the house, Little Bibi.  Being around Little Bibi makes Basanta question everything about her life - why does Little Bibi have so much?  Why can't Basanta have fine things too?  When Basanta finds a ring that Little Bibi has lost, it doesn't seem to wrong to consider keeping it for herself.  Little Bibi has so much.  Will she even miss the ring? In the course of the story, readers follow Basanta as she learns about the things that have real value in your life.

There's a lot to love in Zia's second novel but what really stands out is the setting. Though the village where Basanta and her family and friends live is never named, the details of life there are richly woven throughout the text.  We meet the merchants and families that create the fabric of the village and spend time with the children as they play, conspire, and create together.  Basanta is a determined, curious girl who questions the way her world works and doesn't just settle for "that's the way it is."  Her Amma is another great character - she loves Basanta but also expects her to make hard choices, do the right thing, and think about her actions.  I love grown-ups with personalities of their own (that are still so loving) in children's literature. One of my favorite parts of Child of Spring is a kite flying battle between the children in the village. It's a lively, exciting scene that brings play and competition to children to life in a very immediate way. Basanta's struggles to understand her place in the world is also a struggle to understand her place in the community of her village and this is, again, where Zia's writing really shines.  This is a book so firmly rooted in place it is almost tangible. I think this would be a great book to do as a read-aloud to a class: the chapters are short and episodic and there's lots of great, descriptive writing to dig into.

A few notes: I wish Peachtree hadn't chosen to italicize the numerous Hindi words throughout the text. There's no need to italicize another language in a text, even if that is the way "it's always been done."  It distances the reader. (Check out Daniel José Older's awesome video about why he doesn't italicize Spanish in his stories - this is it in a nutshell.) I also wish Zia had been more definitive about the exact place in India (an author's note mentions the book is set in "the state of Hyderabad in India." which is where Zia grew up) and time of the story. I have also seen a few reviews refer to this as a middle grade book but I think it is much more suited to to an older elementary crowd, so keep that in mind as well. (I think it would be perfect for 4th-6th grade readers.)

I was glad to spend time with Basanta and her entire village - the children are ingenious and determined and they have fun and are allowed to make mistakes like real kids. I was taken with this sweet and immediate story of growing into a community and a place.

Reviewed by Angie Manfredi
Posted by Reading While White at 5:00 AM

I understood "middle grade" novels to be appropriate for ages 9-12. Doesn't that line up with your recommendation for 4th-6th grade?

I understood "middle grade" novels to be appropriate for ages 9-12. Doesn't that line up with your recommendation for 4th-6th grade?

I don't think middle grade has a precise target but I usually recommend middle grade titles for 11-14 and personally, and this title feels a little young for that age. I am seeing this book recommended for middle school but I think it's better for upper elementary. In my town, middle school is 7th-8th grade only so I'm also used to that as shorthand. Hope that clears it up and you'll check out this title for yourself and determine what grades/ages you want to share it with.

I appreciate this question about middle grade as it is one I also wonder about. I teach 4th grade and so think of the beginning of middle grade as being for 9 and 10 year olds. I mean, the middle grades are in the middle of the K-8 learning time: grades 4-6, no? Above that and they are in the early YA years (Printz being 12 and up). My students are definitely not reading chapter books --- those written for emerging readers. It frustrates me, to be honest, that 9 and 10 year old readers so often are squeezed out. If they aren't reading middle grade books what would you call the books they are reading?

Sometimes there seems to be confusion between the usage of 'middle grade', which like Monica I would tend to say is grades 4-6 (maybe, more generously, grades 3-7) and 'middle school', which is usually grades 6-8.

But nothing is as egregious as books for middle grade and middle school being called "YA".

I think middle grade is a publisher's designation that came about because Harry Potter occupied so many slots on the New York Times Best Sellers list. In order to have more books published for adults on the list, the Times started separate children's best sellers lists. I don't think I heard the term until I joined a children's lit discussion group around 2005 that had a number of writers as members. Before that, I always thought more in terms of preschool, primary, intermediate, middle school and high school. I do think that the way "middle grade" is used today means a wide swath of ages 8-12, with grades 4-6 as the sweet spot. In the end, of course, it's about the individual reader and matching the right book with the right reader.