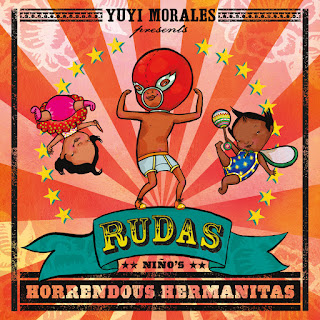 Niño's back and this time he's completely upstaged by las hermanitas -- the lucha queens. In lucha libre there are two kinds of wrestlers -- the Técnicos, those who play by the rules, and the Rudos, those who don't. The toddler twins are definitely in the second category.

First introduced at the end of the popular Niño Wrestles the World when they awakened from their nap, here they are fully awake and running the show.

The story opens with Niño quietly minding his own business, creating the drawings for a picture book, when the twins show up, ready to take on all comers. And the same cast of adversaries returns: El Extraterrestre, Cabeza Olmeca, El Chamuco, La Momia de Guanajuato, and La Llorona. None of them, not even Niño, can defeat the Rudas.

The genius here is that all the Rudas' tactics are typical toddler behaviors. They defeat El Extraterrestre with the Poopy Bomb Blowout, and when the Olmec Head steps in to vanquish them with a diaper change, they go for the famous Nappy Freedom Break.  They teethe on El Chamuco's tail and then point to the Guanajuato Mummy as the culprit and, most hilariously, grab two of La Llorona's children, saying "Gimme!" and "¡Mio!"  In the end, only Niño can defeat them by employing a classic older sibling move. 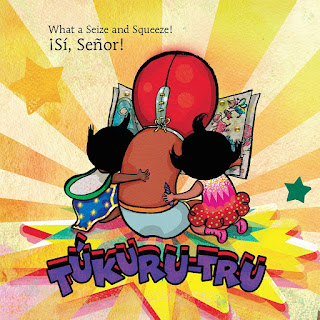 As with the first book, there is a playful blend of Spanish and English, and plenty to look at in the illustrations -- El Extraterrestre trying to sneak up on Niño with his net, the perpetually open onesie that results  from the Nappy Freedom Break, and a clever cameo appearance by Señor Calavera, just to name a few.  What I most appreciate about the book, in addition to the brilliant artistry, is the way in which it captures young children at play, working things out for themselves without any adult interference. ¡Vivan Niño and his hermanitas!