As part of our Spotlight on #OwnVoices in September, we will feature books not published in the last year on Throwback Thursday. Today Angie looks at the John Steptoe Award-winning novel published in 2015. 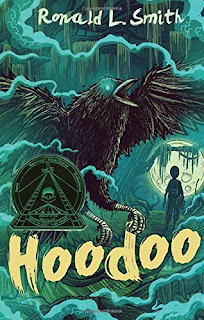 The first time I read Hoodoo was in Mississippi in July.  Though it was a sweltering day, I had goosebumps from almost the very first page.  Hoodoo is that kind of book – it’s so good it can make a Mississippi summer day seem cold as winter.

Hoodoo Hatcher is 12 years old. He has a heart-shaped birthmark under his eye, which is something of a namesake for him because when Mama Frances saw it she declared that he had powerful hoodoo – folk magic – in him. Only Hoodoo hasn’t ever shown a single lick of magical ability.  Turns out he doesn’t have any hoodoo in him at all, unlike everyone else in his family, unlike his Daddy, who was a powerful mojo man who met a mysterious end. At least that’s what Hoodoo has always thought.  But now The Stranger has arrived in Hoodoo’s small Alabama town and dark things are following in The Stranger’s wake – people aren’t acting right, corpses are being dug up from the local cemetery.  And The Stranger is looking for a boy. A boy named Hoodoo.  But why?  And how can Hoodoo stop The Stranger if he doesn’t have any magic of his own?

This is a variation of the Hoodoo booktalk I’ve done for a little over a year now.  (And please feel free to steal it to use in your school and outreach visits.) I’ve used it for 6-8th grade classes and every time I use this booktalk, the kids are spellbound.  I watch as their mouths dangle open or a little “oooooh” runs through the crowd.  Without fail at least one kid waves their hand or blurts out a variation on “I BET HE DOES HAVE MAGIC, THOUGH!!!” and the others nod with appreciation.  This is an acknowledgement of how skillfully Smith hits the beats in this story.  Yes, Hoodoo does have magic of his own, but he’ll have to go through trials and tribulations as he learns how to access it and what it means.  Kid readers know this and they savor it because it tells them that they, too, have their own possibilities and are on their own journeys.

Hoodoo is just a joy to read.  There’s no other way around it. Sad, scary things happen in it - there's real loss and consequences and very dark dealings but reading it is ... fun. It's a book you get swept up entirely in, thanks in large part to Hoodoo’s narrative voice. This is an amazing example of how a book is written authentically in dialect.  It's never overdone, it never sounds condescending or fake but it has a real rhythm of the way a Black boy in Alabama in the 1930s might speak. Hoodoo reaches out to the reader and he has such a real kid voice. He gets frustrated by the way grown-ups in his life, Mama Frances especially, seem to be keeping information about his parents and magic from him.  And Hoodoo, like any normal, real kid would, is plenty scared of The Stranger, a fictional creation so scary and malevolent he practically leaps off the page.  (The Stranger reminds me of the darkest creations from Stephen King. This book reminds me a lot of King’s writing, because both King and Smith know that nothing is scarier than childhood.)

Hoodoo is also the perfect example of how an authentic setting can take a story to the next level. Smith sets Hoodoo in a small Alabama town during the Jim Crow era and the details of how this impacts Hoodoo’s life are woven quietly and yet seamlessly throughout the story.  It makes one thing clear: Hoodoo and his family and friends are on their own when it comes to fighting The Stranger. No White people are going to get involved and, anyway, they have no way to understand or access the generations of tradition and hoodoo that bind all this good and evil together. Hoodoo unspools like a true classic Southern gothic yarn, only unlike the work of Faulkner, O’Connor, or Welty, Smith centers the Black experience. I love Hoodoo for so many reasons, but one of them is because the White gaze is just … irrelevant. I want children’s literature to not just diversify but decolonize and Hoodoo is a book that takes that seriously.

Every time I booktalk Hoodoo, I have kids fighting over it.  It’s a perfect book to take on class visits: high interest horror with a fast-paced plot. Hoodoo won the 2016 Coretta Scott King John Steptoe Award for New Talent, which is the perfect award for it because it signals that Ronald L. Smith is an author of great talent to watch.  I couldn’t agree more. Hoodoo Hatcher is an indelible character and the exact kind of Black kid hero kid lit needs more of.  All this means I think you need to start sharing this book immediately, if you didn’t know. (As Hoodoo himself would say.)

Thanks for this review. Added it to my TBR list.