As part of our Spotlight on #OwnVoices for September, we will feature books not published in the last year on Throwback Thursday. Today Sam looks at a graphic novel memoir published in 2012.


In the realm of children’s books, graphic novels are a relatively new phenomenon. The popularity boom for the format has leveled off somewhat, but I think we can all agree that the kid’s graphic novel section at the library is here to stay. And yet I still often see this question on listservs and Facebook groups: “What are the must-have titles if I’m starting a graphic novel section for kids?” Anything by Gene Yang or Raina Telgemeier; the Big Nate, Babymouse, and Amulet series; groundbreaking Newbery Honor books El Deafo and Roller Girl – these and many more are legit, go-to titles that get thrown out all the time in answer to this question, and for good reason. But I would put Little White Duck in my own first 5 graphic novels for kids – I believe it is absolutely essential for all children’s collections. 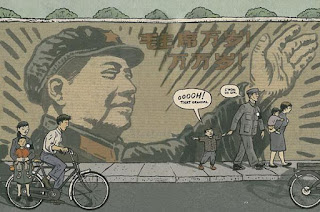 Based on incidents from Liu’s early life, this episodic memoir finds Da Qin (Liu’s childhood nickname – it means “Big Piano”) and her younger sister Xiao Qin (“Little Piano”) navigating life at a time of transition in China, the 1970s. As Liu said in an interview, her generation was “caught between one way of life and another, between the old and the new,” a dynamic that Martínez (who is also Liu’s husband) captures beautifully in his nuanced, earth-toned art.  The result is a short graphic novel that packs a surprising emotional punch.

Each brief story has a title set off in a box at one of the edges of a panel, giving the book a scrapbook feel. In the first vignette, Da Qin recalls the day Mao Zedong passed away. This may not have been a sad day for many Chinese at the time, but for Da Qin’s family Mao’s death was a devastating loss (a subsequent full page spread explains why). Another story shows how Da Qin and Xiao Qin tried to “be like Lei Feng,” a martyred Chinese soldier who was made to symbolize the selfless, nameless citizen, the “tiny screw that completes the machine.” A montage shows the inspired sisters helping those in need, including a group of baby chicks who don’t seem to be getting enough water to drink in the hot sun; in a darkly humorous sequence the girls “help” the chicks drink water, with disastrous results.

The narrative reaches its emotional climax when Da Qin’s father takes her to visit his extended family, who are mostly poor farmers. The kids from the local village are drawn to the fancy duck design on Da Qin’s jacket; they rub their grimy fingers all over it, turning the white duck a grubby black. Afterwards, Da Qin recalls, “I wanted to let them touch my coat, but at the same time, I didn’t want them to get it dirty.” What strikes me about this episode is the way Martínez visually delineates Da Qin’s inner struggle both before and after the other kids mess up her jacket; that this is Da Qin’s first time considering class differences is made obvious through the sequencing and storytelling. But all is handled with a light touch, leading into a symbolic coda: Da Qin and Xiao Qin, riding atop a crane high over a city, the Yellow Crane Tower representing China’s past behind them, a shimmering line of skyscrapers symbolizing the country’s future ahead.

Reviewed by Sam Bloom
Posted by Reading While White at 5:00 AM

Thanks for pointing to this book, Sam.

It is important librarians not default to the same set of books or single name in any given genre. There are stars, of course, but kids will find the stars all on their own because, well, they're stars! Drawing attention to other books and writers is key to growing the genre.

Thanks, Debbie! I agree that librarians/teachers/gatekeepers of children's literature MUST draw attention to books besides the big names in any given genre. I think the only way to adequately do that, honestly, is by reading/seeking out/demanding #OwnVoices titles. Otherwise I think you're going to see stagnation (which we've obviously seen and been seeing basically across the board, just the status quo over and over again)