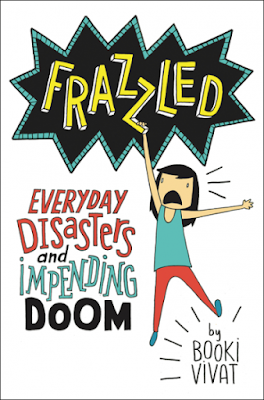 Abbie Wu is starting middle school, and she desperately needs to figure out what her THING is. She’s not perfect like her big brother Peter, or adorable like her little sister Clara (who can get away with anything). She’s not a master gamer like her best friend Logan, or a super actress like her other best friend, Maxine. When Maxine and Logan get assigned to the same homeroom, Abbie’s anxieties skyrocket. To make things worse, the lunchroom is corrupt, with the 8th graders dominating the only line providing delicious food. When Abbie overhears her study hall companions complaining about the cafeteria, she realizes that they have shared problems, and that they can work together towards a solution. Abbie leads her new friends (and soon all of Pointdexter Middle School) in a “lunch revolution,” where the kids exchange food. When parent pushback puts an end to the lunch trade, big brother Peter takes her out for pastries and provides encouragement, reinforcing that “not everything has to work out” all the time. Setbacks aside, Abbie learns that she makes a decent “voice of the people” and that maybe she isn’t “100% doomed” after all.


Although Abbie’s Asian American identity is not mentioned specifically (Wu is a name with Chinese origins), readers will find themselves relating to and learning from various aspects of Abbie’s story—especially her status as “middle child” and the stress and anxiety she carries. Vivat’s simple, black and white illustrations bring to mind notetaking and doodling in the margins, which is appropriate for this hybrid novel about school. The pictures add humor and support the plot, too. For example, as Abbie reflects on how middle school “changes everything,” she watches her friends float away while holding onto helium balloons, denoting the distance growing between them. Abbie speaks openly about her emotions, but she casually uses ableist language (like “crazy”) and pokes fun at a teacher rumored to be “shipped off to a psych ward” after a mental breakdown.


All in all, Frazzled is a back-to-school story that will appeal to fans of Rachel Renée Russell’s Dork Diaries and Grace Lin’s Pacy Lin Novel series. The story wraps up at the end, but the sequel possibilities are wide open. I suspect young readers, after getting a chance to read Frazzled upon its release on 9/27, will be asking for more.

Thanks for this very useful info you have provided us. I will bookmark this for future reference and refer it to my friends. More power to your blog.
Read Online