September Spotlight on #OwnVoices: To Catch a Cheat 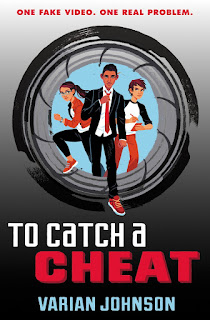 Following The Great Greene Heist Jackson Greene and his gang are doing their best to stay out of the con business. Jackson is devoting his focus to the  Maplewood Middle School Botany Club, Charlie de la Cruz edits the Maplewood Herald, Megan Feldman and Hashemi Larijani geek out with the Tech Club while Bradley Boardman serves as the guidance office helper. When a wing of the school is flooded suspicion is immediately aimed at the Greene gang. It appears Dr. Kelsey, the school principal, lacks any hard evidence of responsibility for the prank until Jackson receives a link to surveillance video.

Hashemi and Megan circled the table to stand behind Jackson. A grainy video of the social studies wing flickered on the screen. Then a familiar face popped into view.


“And me,” Megan added a few seconds later.

The video continues and shows the kids exiting the bathrooms and water pouring out into the hallways. The gang has problems but being caught is not one of them - the video is a fake! They receive instructions that this video will be sent to Dr. Kelsey unless they steal the answers to the upcoming social studies final exam. As Jackson and company set out to discover who is responsible for framing them the layers of plotting develop rapidly. Jackson and Charlie are clashing over who should lead the crew. The students who want the exam questions are being used by two other students seeking revenge on the gang for an embarrassing event in the past. The aspiring chair of the school honor board, Serena Bianchi, is convinced Jackson is up to no good again. She sets out to catch the crew by getting access to the school surveillance system.  Readers who can suspend their incredulity that the principal and bumbling security guard would give a middle school student access to the surveillance videos are in for a fast-paced technology fueled con to top previous jobs.

The gang knows they could prove the video is a fake but time is working against them. They will never get the video analysis complete before the final exam. They must decide between being considered guilty (even for a short period of time) or going through with the theft of the answer key.  Brief chapters loaded with pop culture references, a variety of cons (both explained in a concluding section), high end technology, and lots of dialogue keep the story moving and growing. A few characters could be more nuanced in their development but this is easy to ignore considering the large number of actors (detailed in the front papers) in this con. After all, the heart of book is Jackson Greene - an African American male character who defies the single story of Black boys that often pervades children’s literature. Jackson is a con-man/James Bond inspired guy who is endearing to the reader. He uses his smarts and a team to operate on the fringe of legality in order to reach positive outcomes. This is a narrative common for White male characters (think of Tricky Vic or Alex Rider) but rarely (if ever) inhabited by an African American.  To Catch a Cheat will be greeted with enthusiasm by young readers.


Reviewed by Ernie Cox
Posted by Reading While White at 5:00 AM