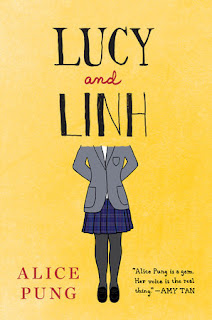 Lucy’s Chinese family emigrated from Vietnam to Australia when she was a small child. They live in Stanley, an immigrant and working class suburb of Melbourne. Lucy's mother sews under-the-table, fashion industry knock-offs from their garage while watching her toddler brother and taking care of their home. Her father pulls long shifts at the carpet factory.

Lucy’s story begins with her sitting the exam for the "Equal Access" scholarship at Laurinda, an upscale, private girls' school. To her surprise, she's selected as the school's one and only scholarship recipient.

The story is told in letters Lucy writes to a girl named Linh. Linh’s identity, although it must be inferred, seems obvious: she is one of Lucy’s Stanley friends; someone she’s left behind when she goes to Laurinda, even though Laurinda is not a residential school.

The differences between the world Lucy’s Laurinda classmates’ inhabit—a world in which being White and wealthy is the norm—and the world Lucy has come from and the life she leads at home is vast and often shocking. It’s underscored in countless ways, day after day, and Lucy’s dysphoria as she moves between these worlds is profound. But even as she rails against the wealth and privilege and racism of her classmates in her mind, it gradually affects her and the way she views her home. “Everything was so cheap and tacky here …. The dollar store that I loved so much, the place that brought such endless cheap joy to the Lamb, seemed like a roomful of junk. All the things that I’d loved so much now seemed sad …. Now that my life had shrunk down to homework, and the Lamb, and sewing after school, my mind started wandering to places I had no business being in.” (p. 203-204)

As the school year progresses, Lucy is taken under the wing of the “Cabinet,” the ruling trio of girls at Laurinda, a group that had previously dismayed her with their contempt for classmates and teachers. She understands she hasn’t been invited into this inner circle for no reason. But unlike the tutor she was assigned, these girls don’t suffer from misguided good intentions, let alone a White savior complex. Lucy finally realizes that the “Cabinet, with the tacit approval of the headmistress, keeps people in line and that they have brought Lucy close to the center of power so that she will take advantage of the position and in doing so, acquiesce, representing the school in the manner the school proscribes.

It is at this point in the novel that Linh finally makes an appearance in the flesh, fierce and genuine and brilliant. She is not who we thought, and her identity underscores the terrible rift Laurinda created in Lucy's life, but it's a rift she is now ready to repair. She will take what Laurinda has to offer but not leave anything behind.

Alice Pung’s writing is fresh, original, and deeply perceptive. She is sometimes funny, sometimes crushing as she reveals racism and classism ranging from the understated and subtle to the glaring. Pinpricks or kicks, all are sharp and scathing. From the hierarchy of high school to the hierarchy of society, Pung stitches a novel that explores big issues through complexities of characters and family and social relationships that feel genuine. Her story, infuriating with regard to some of its truths, is stunning in its poignancy with regard to others. It is, finally, also one difficult to put down.

Sounds like a powerful book. thanks for bringing it to my attention.