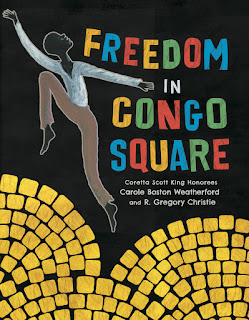 Freedom in Congo Square begins with a two-page foreword by historian Freddi Williams Evans providing historical background and context for this picture book about Congo Square in New Orleans, which was a vibrant gathering place for free and enslaved people of African descent in that city. Evans explains that the enslaved who came to New Orleans under brutal conditions and continued to live brutal lives as the property of others were the ones who made Congo Square famous. “Code Noir” laws designated Sundays as holy days, Evans explains: work-free and for worship. While Sunday mornings may or may not have been work-free in truth—some worshipped, some still worked, for themselves or others—Sunday afternoons found many Blacks gathering in places around the city, “until a law made Congo Square the only place they could meet.”
In Congo Square, the musical traditions and dances of different Central and West African cultures resounded. Some played drums and other instruments, some danced, others sang, clapped, or shook gourd rattles. New styles of songs and dances were introduced by people coming from across Louisiana and other states. “Over time, the intermingling of the different African, Caribbean, and European styles led to the development of new styles.” Jazz music was one of the styles that grew out of this dynamic convergence.

Congo Square remains a vibrant gathering place today, Evans notes, one in which people gather from all over the world. “There they enjoy the freedom of expressing themselves by singing, dancing, drumming .… If you are ever in New Orleans on a Sunday afternoon, feel free to join in.”

The page turn that follows this concluding line of the Foreword is dramatic because it takes us back to the time when Congo Square first became famous. For those who skip the Foreword (don’t skip the Foreword), the start is no less powerful: “Mondays, there were hogs to slop, / mules to train, and logs to chop. / Slavery was no ways fair. / Six more days to Congo Square.”

Carole Boston Weatherford’s potent text doesn’t waste a word or a syllable. The first fourteen couplets count down the days to Congo Square, documenting the work of enslaved men and women as they labored in fields and in houses, in despair and in defiance. “The dreaded lash / too much to bear …. Run away, run away. Some slaves dared.”

The remaining eleven couplets mark the transition to Sunday, and the gathering in Congo Square. Here the tone turns hopeful, spinning out details of the joyous gathering where news is shared and music and dancing, chanting and singing lift spirits and hearts. “Grouped by nation, language, tribe, / they drummed ancestral roots alive …. The piece of earth was a world apart. / Congo Square was freedom’s heart.”

The twenty-five couplets that comprise the principle narrative are set against R. Gregory Christie’s spare, expressive paintings. Stylized, elongated figures with little or no facial details carry out the heavy work of Monday – Saturday. Sometimes they stand erect, sometimes their backs are stiffly bent with burden. An image of the enslaved workers asleep has echoes of Tom Feelings’ haunting images for The Middle Passage—black silhouetted figures lying prone.

But these stiff, constrained people break loose and free once Sunday comes, moving fluidly, with joy and abandon, against pulsing, vibrant orange, yellow and gold backdrops that erase all detail of setting—the mood and the music is all that matters. Only the final page spread brings a return to some background detail, with the suggestion of trees. Congo Square, it is clear, is a brief, psychic escape from the realities of enslavement.

A glossary and an author’s note conclude this rich and stirring work. In her note, Weatherford provides additional historical information, including the fact that “there was more to these gatherings than revelry” as she explains that Congo Square also served as a hub of communication for free and enslaved Blacks as well as a marketplace. “For a few hours every Sunday, Congo Square gave slaves a taste of freedom.”

Love this book!
Anyone who will be in Atlanta for NCTE or Midwinter must plan on checking out Greg's original art for this book while in town. The exhibit runs through the Sunday of Midwinter (January 22).
Details from the Auburn Avenue Research Library's website are copied below.
"Freedom in Congo Square
The Illustrated Children’s Literature of R. Gregory Christie
Fine Arts Exhibition
Thursday, August 4, 2016 – Sunday, January 22. 2017
The Auburn Avenue Research Library and Hammonds House Museum, in collaboration with GAS-ART GIFTS (Gregarious Art Statements), Little Bee Books, and Georgia State University, will host Freedom in Congo Square, a compelling new exhibition featuring the illustrated children’s literature of award winning artist R. Gregory Christie. This exhibition, made possible by the generous support of the Atlanta-Fulton Public Library Foundation, showcases the original art created for the illustrated children’s book, Freedom in Congo Square. Accompanying these absorbing images is the lyrical prose of renowned author Carole Boston Weatherford, creating a powerful exploration into the lived experiences of enslaved Africans, as they struggle to preserve their dignity and African heritage. This exhibition is on display in the Chidren's Gallery at the Auburn Avenue Research Library, 101 Auburn Ave NE, Atlanta, GA 30303."