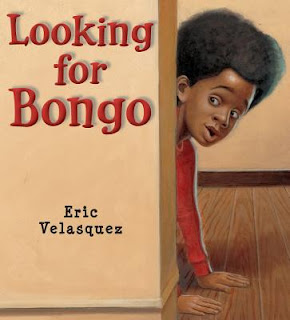 Last February, Edi Campbell, Sujei Lugo, Sofia Quintero, Torrey Maldona, Robert Liu-Trujillo, and the sisters behind the Twinja Book Reviews hosted a #largefears Twitter chat on the topic "Where are the Afro-Latinx in American history?" After Afro-Latinx participants shared their own experiences and there was discussion about how complex identities can be, the conversation shifted from its original question to Where are the Afro-Latinx experiences in books for children and young adults? The first author-illustrator whose name popped up was Eric Velasquez, as several people recommended his books, including Looking for Bongo, which had just been released.

The picture book begins with a boy in his baseball shirt pajamas, with brown skin and an Afro, looking beneath his covers, under his bed, and right through the fourth wall: “Where is Bongo? I need Bongo to watch TV with me.” In English and Spanish, he asks his grandmother, his cat, his dog, his dad, his mom, and a delivery worker if they know anything about what might have happened to Bongo. When it seems that all hope is lost, he spots the soft arm of Bongo, his plush puppy, between two sets of drums. When Wela (the character’s abuela) accuses him of forgetting where he placed his toy, the child devises a trick to catch the suspected stuffed animal thief. He succeeds on the story’s final page in a high point of action and sibling humor.

Rendered in oil paint on watercolor paper, Velasquez’s illustrations showcase the loving family. Readers see the fashion designer mother working from home, inquisitive pets, a mischievous sister, a caring abuela, and a supportive dad promising to help when he can. Also visible are the family’s cherished books—including a nod to Grandma’s Records by Eric Velasquez himself. Text and images affirm the characters’ Afro-Latinx identities subtly. The English and Spanish dialogue and the pet cat named Gato highlight the two languages spoken in the home. On the title page, Bongo peeks out from behind a set of bongo drums (which originated from Cuba). On the next page, conga drums (derived from African drums) appear beneath the dedication. When Bongo is finally found, it is between these two sets of drums. (Information about the drums and their origins is included in a glossary.) On the back flap of the book, Velasquez shares a throwback family photo and a message that the book portrays an Afro-Latinx family “much like his own.”

February’s #largefears chat brought up the issue that sometimes the Afro-Latinx experience can get lost in terms of representation, especially in books for young people. With Looking for Bongo, this is not the case. Find a copy to read and share, and search the #largefears hashtag on Twitter for more information about the next online discussion.